Will Simpson and Savannah Jenkins Gallop Away with the Goods

In the FEI CSI 2* Silver and Bronze Tour Highlight Events 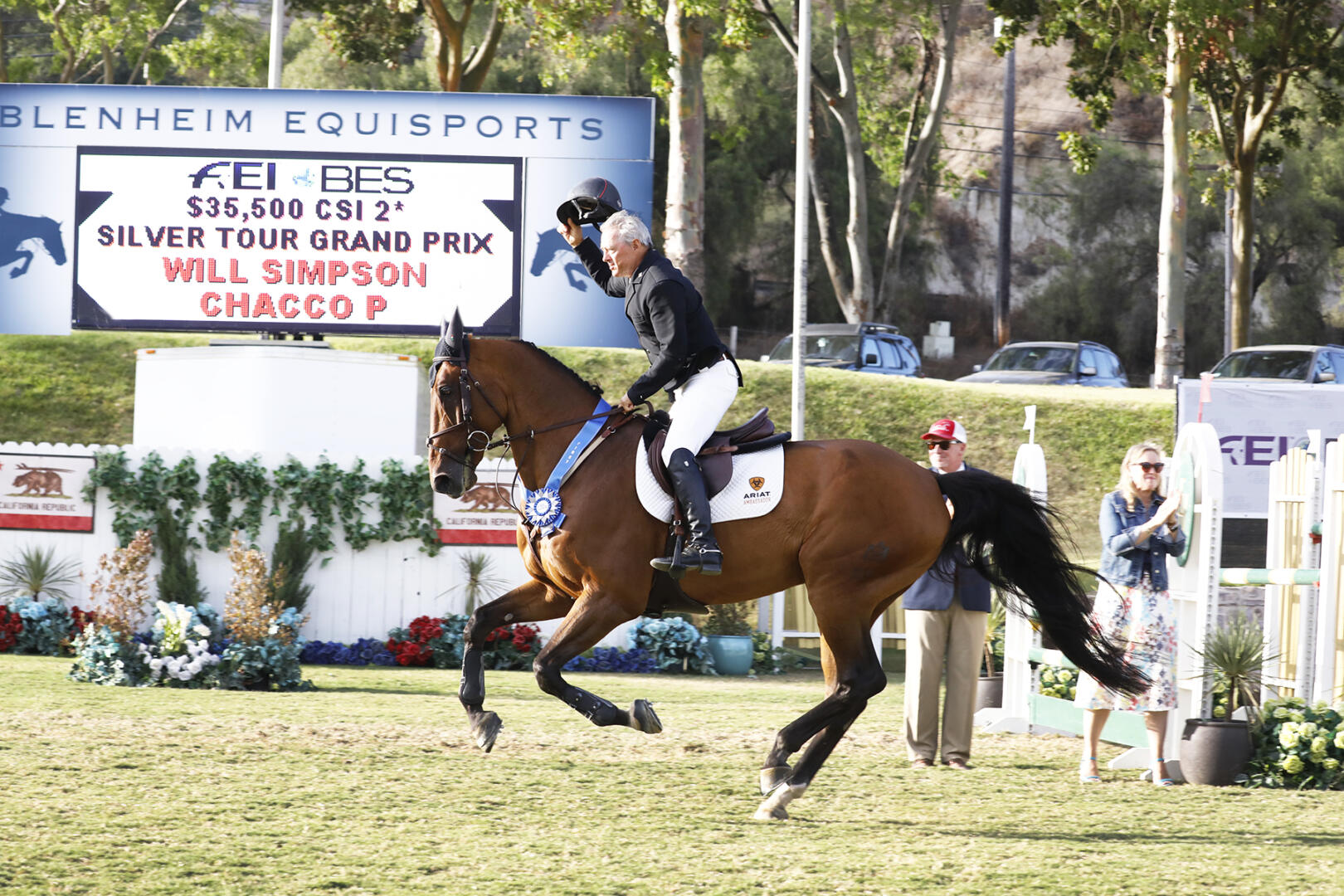 Will Simpson leads the victory gallop aboard Chacco P

August 4, 2019 – Del Mar, CA – It was another day of international competition at the Showpark August Festival FEI CSI 2*, but it was only the Star Spangled Banner that played for the winners of the Silver and Bronze Tour highlight events, as Will Simpson and Savannah Jenkins both posted their second wins over two consecutive weeks of FEI competition at the Del Mar Horse Park. Ivan Tagle designed the tracks for these competitive classes, with forty-one entries in the 1.45m Silver division and twenty-six entries in the 1.35m Bronze division. 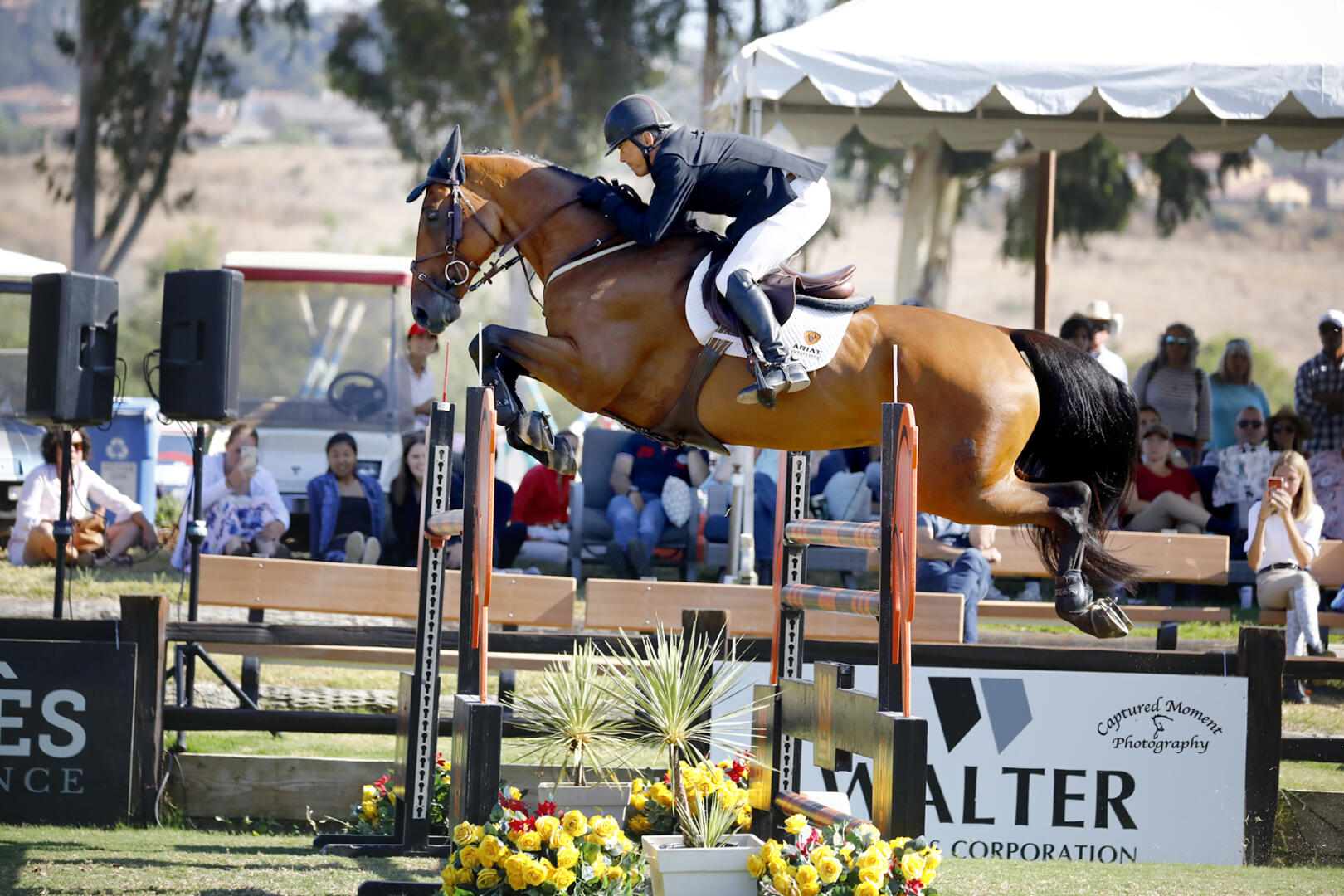 Will Simpson and Chacco P

Baraben was the first to return for the jump off on Caillou, the twelve-year-old gelding owned by Miguel Madero & Luis Pedro Baraben, and the pair finished double clean in a speedy time of 37.62 seconds which ultimately put them in the second spot. 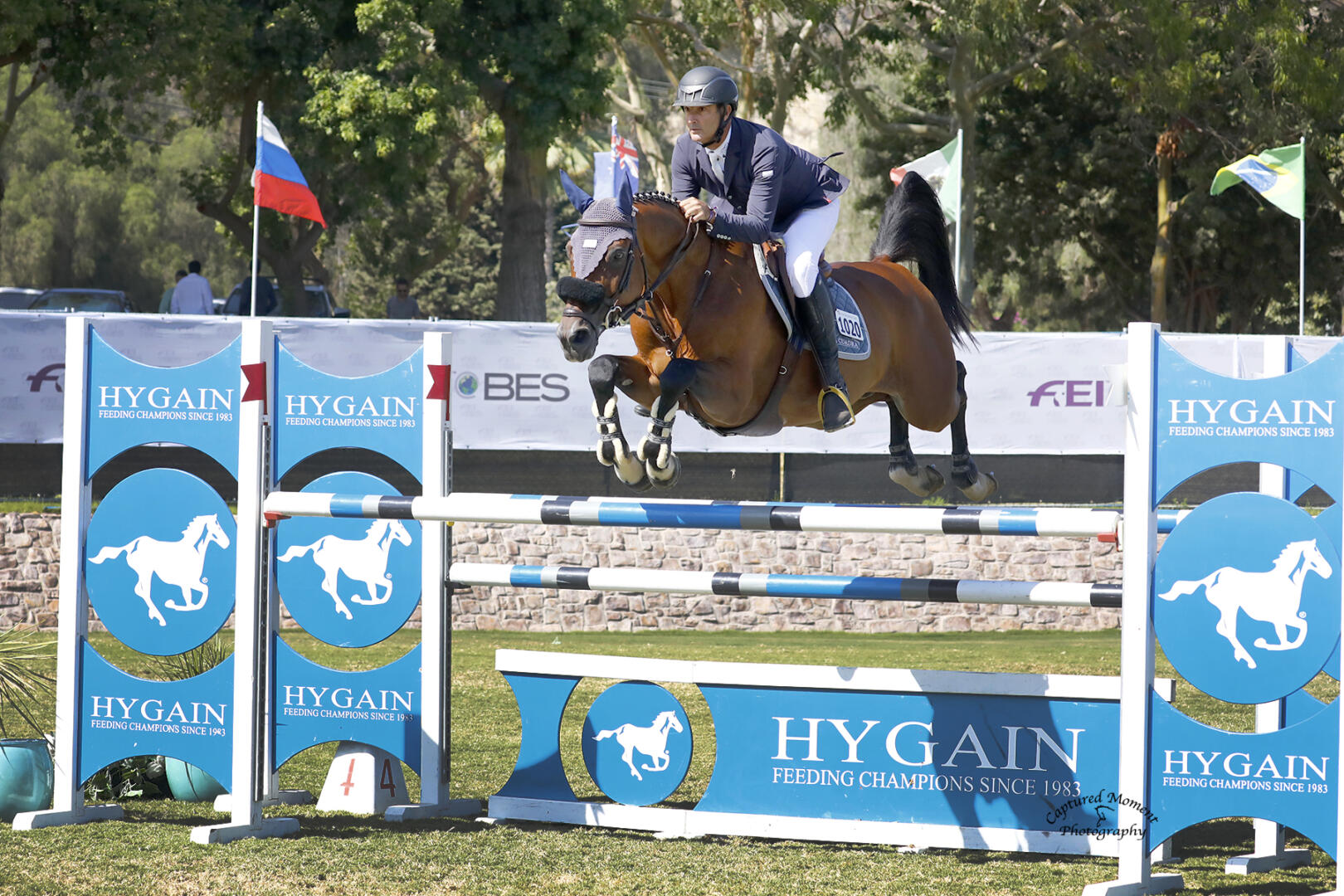 Simpson and Chacco P entered the ring and picked up that ground-covering gallop that has carried them into the winner’s circle many times before, and today was no exception. Making tidy turns with amazing speed , the pair crossed the timers clean in 37.31s, just fractions of a second quicker than Baraben.

Simpson’s time put pressure on the remaining seven jump-off competitors and, although a few came close, nobody was able to go double clear and catch his winning pace.

“I knew I needed to have a fast time in the jump off to take over the lead and to stay in the lead since there were a lot of other riders left to go after me. Chacco’s natural foot speed didn’t let us down,” said Simpson.

Third place honors went to Rowan Willis and Karen Welling’s twelve-year-old gelding, Baccus. They were the final pair to attempt the jump-off track, and they finished in 37.78 seconds, less than a second behind the winner. 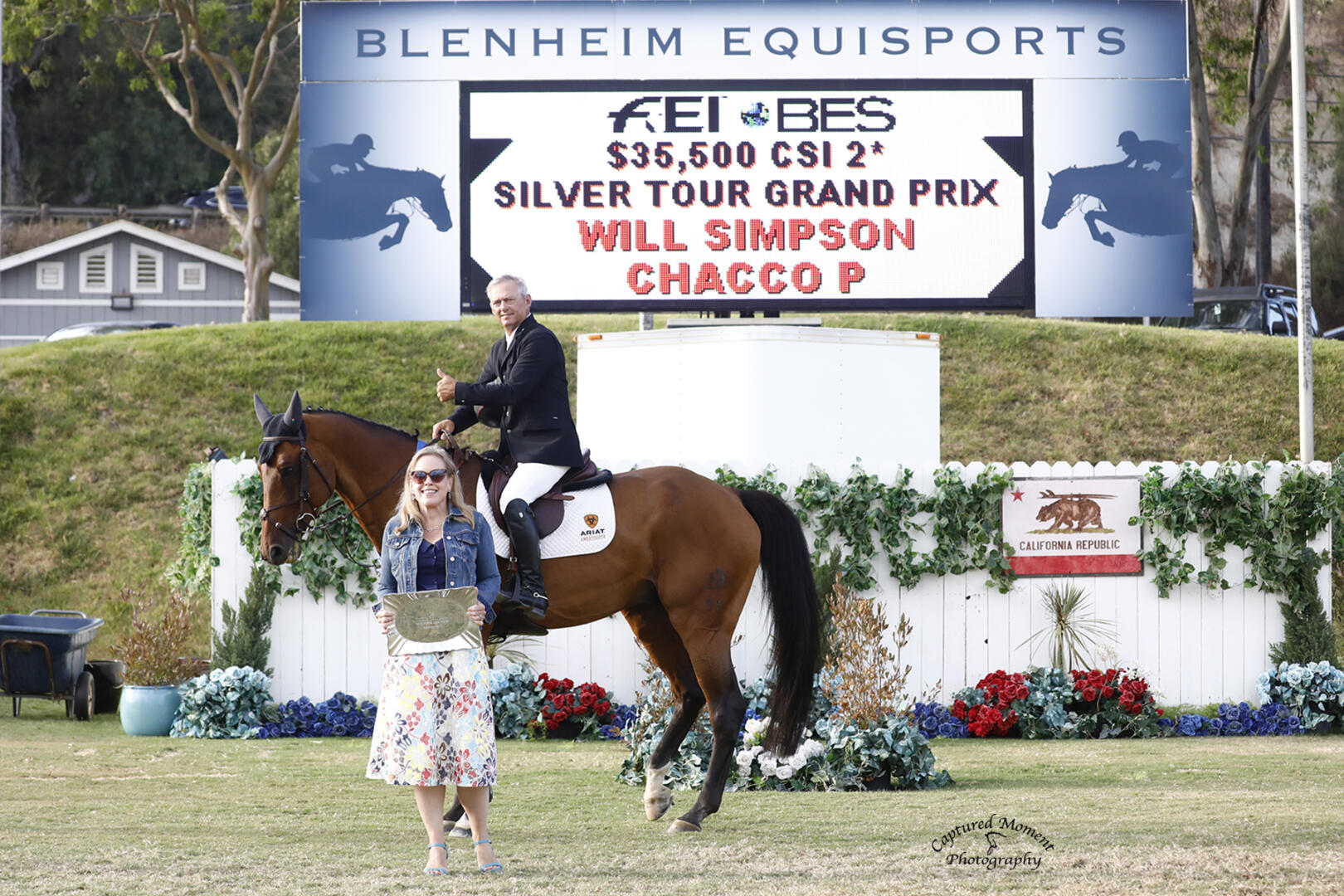 Will Simpson and Chacco P with Melissa Brandes of Blenheim EquiSports 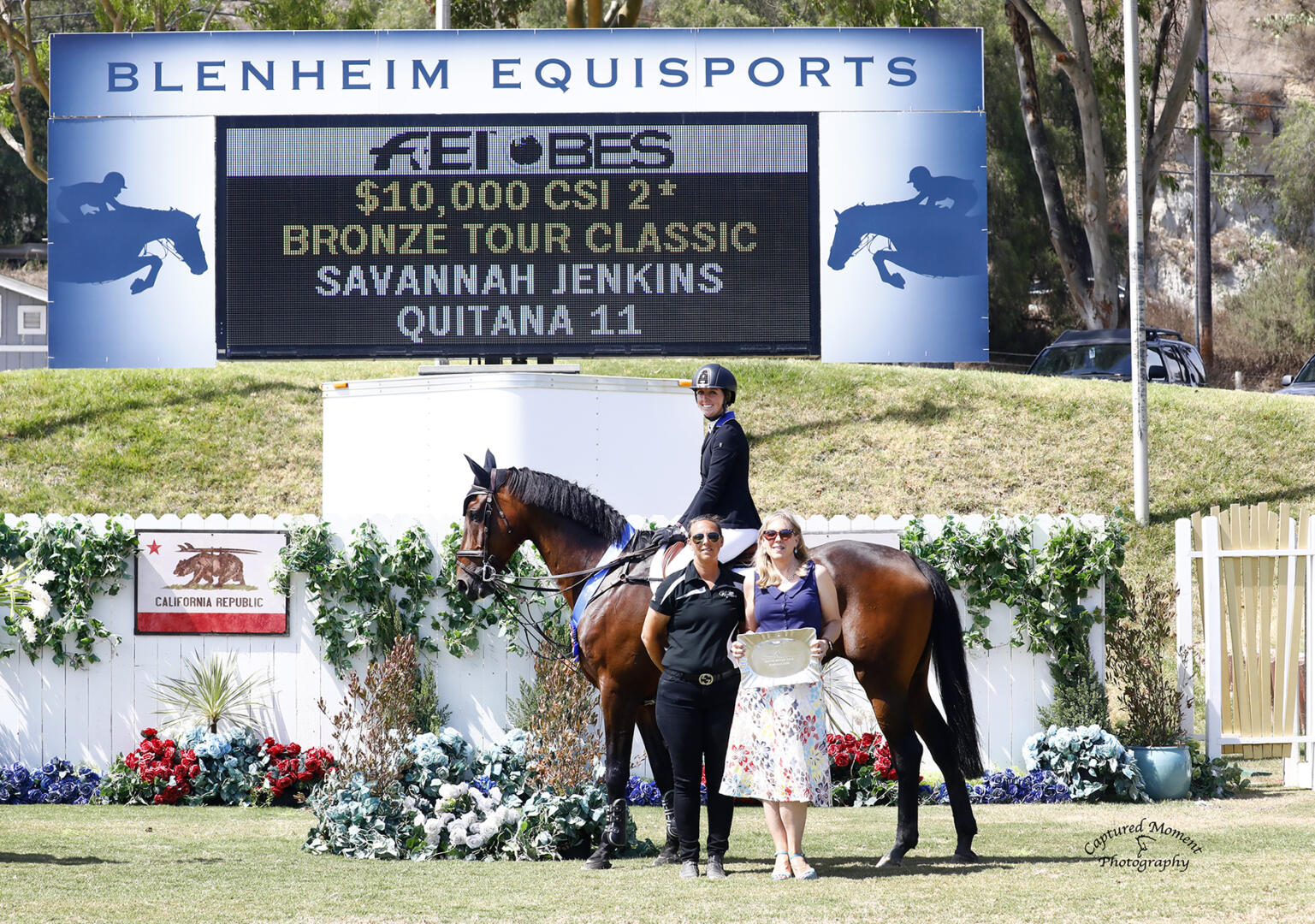 Riding the shortened course first, Jenkins crossed the timers clean in 36.60 seconds. The mare’s natural speed and scope made the pair unbeatable. Martinez Barone, with the ten-year-old KWPN stallion Easy Blue, came the closest to catching her in a time of 37.39s, to claim the second spot. The third double clear round came from Matt Archer and Luigi VD Bisschop, Rhys Farms LLC’s eight-year-old BWP gelding, in a time of 40.75s to round out the top three. 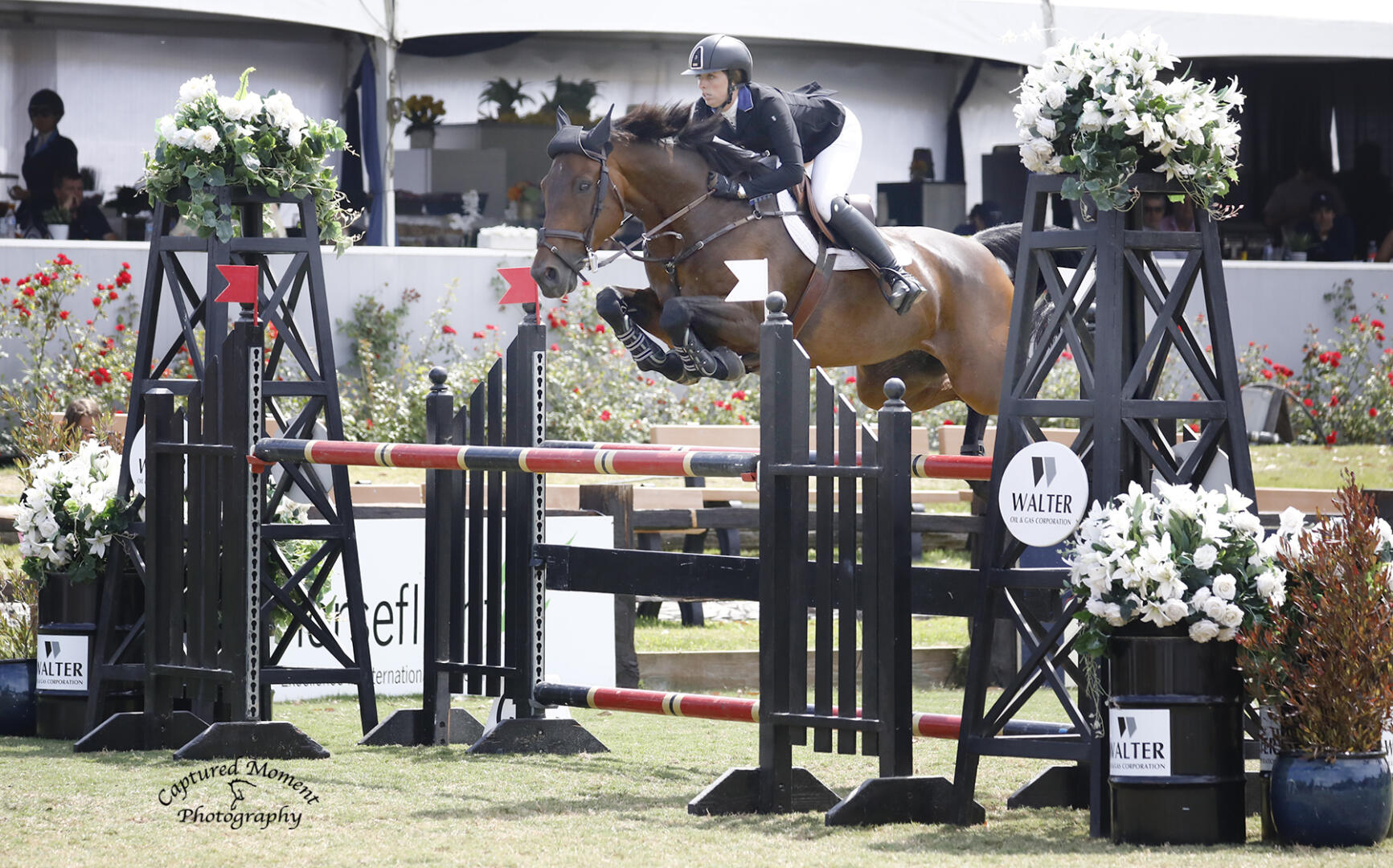 Jenkins was full of praise. “Quitana is such a true competitor and riding a horse like her is a dream come true. I’m so grateful for the opportunity, and for such a fun and successful two weeks here in Del Mar.”

Watch interviews and jump-off rounds with winning riders (below)

Competition for the Showpark August Festival wraps up on Sunday. With medal regionals and finals, breeding championships, Markel Insurance 1.45m Grand Prix qualifiers, as well as U25 classes, and more, the horse show scene returns to San Juan Capistrano with the Blenheim Summer Classic in mid-August, then travels south the Del Mar for the final two weeks of the Showpark season, Showpark Summer Classic and Showpark All Seasons.