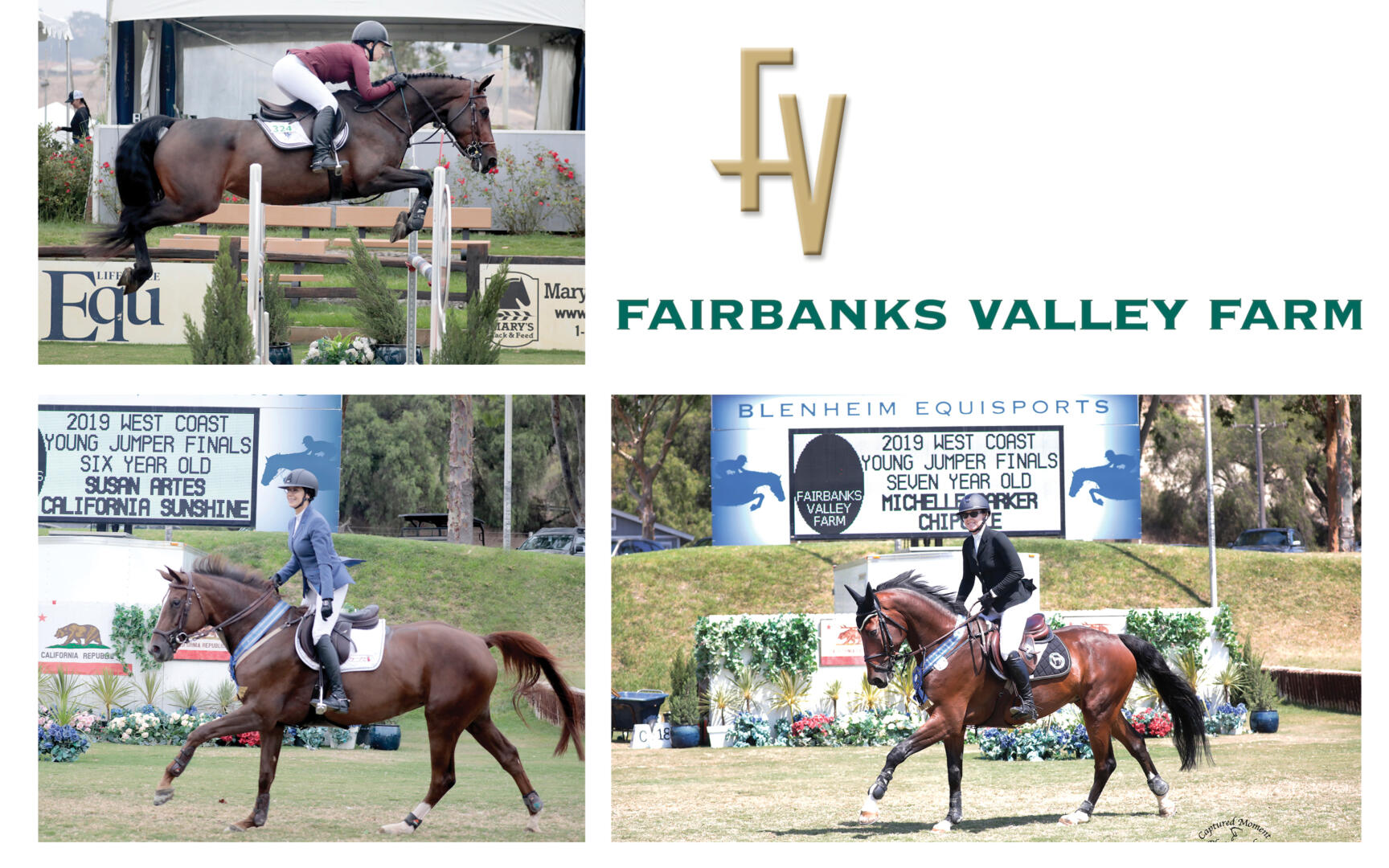 September 2, 2019, Del Mar, CA – As the Blenheim EquiSports Del Mar season comes to a close for 2019, thirty-six youngsters from ages five to seven came to compete on the grass field for the $45,000 Blenheim West Coast Young Jumper Series Finals, presented by Fairbanks Valley Farm. A number of these future stars gained solid miles with top course designers at Blenheim EquiSports shows that offer young jumper classes for free in both San Juan Capistrano and Del Mar. 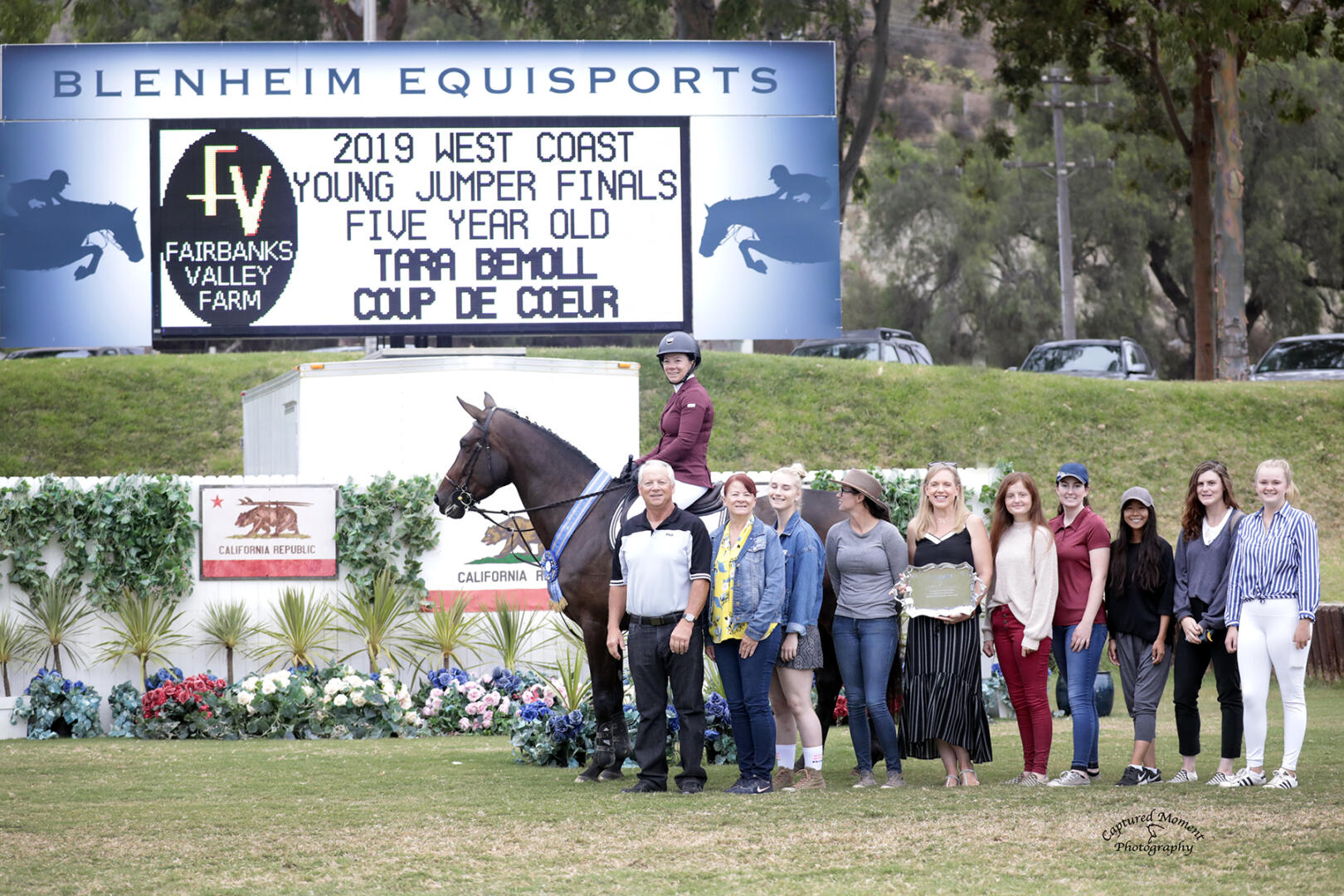 After three rounds, only one five-year-old was triple clean to take the victory in the division, Tara Bemoll and her own bay Dutch Warmblood mare Coup De Coeur. The mare’s skill and scope shined as she achieved a perfect score in the Finals.

“I was very happy with her this entire week,” Bemoll noted, “She is a very fast and competitive horse who wants to win, and she definitely has the natural ability to do so.”

Finishing with a score of four faults over the three rounds of competition, Soehnke Theymann and Cequera La Beau took home the second-place finish. Arsia Ardalan with Smoke on the Water and Cassie Frost with Carpetino both rounded out the podium with a total of 8 faults and a tie for the third position in the division. 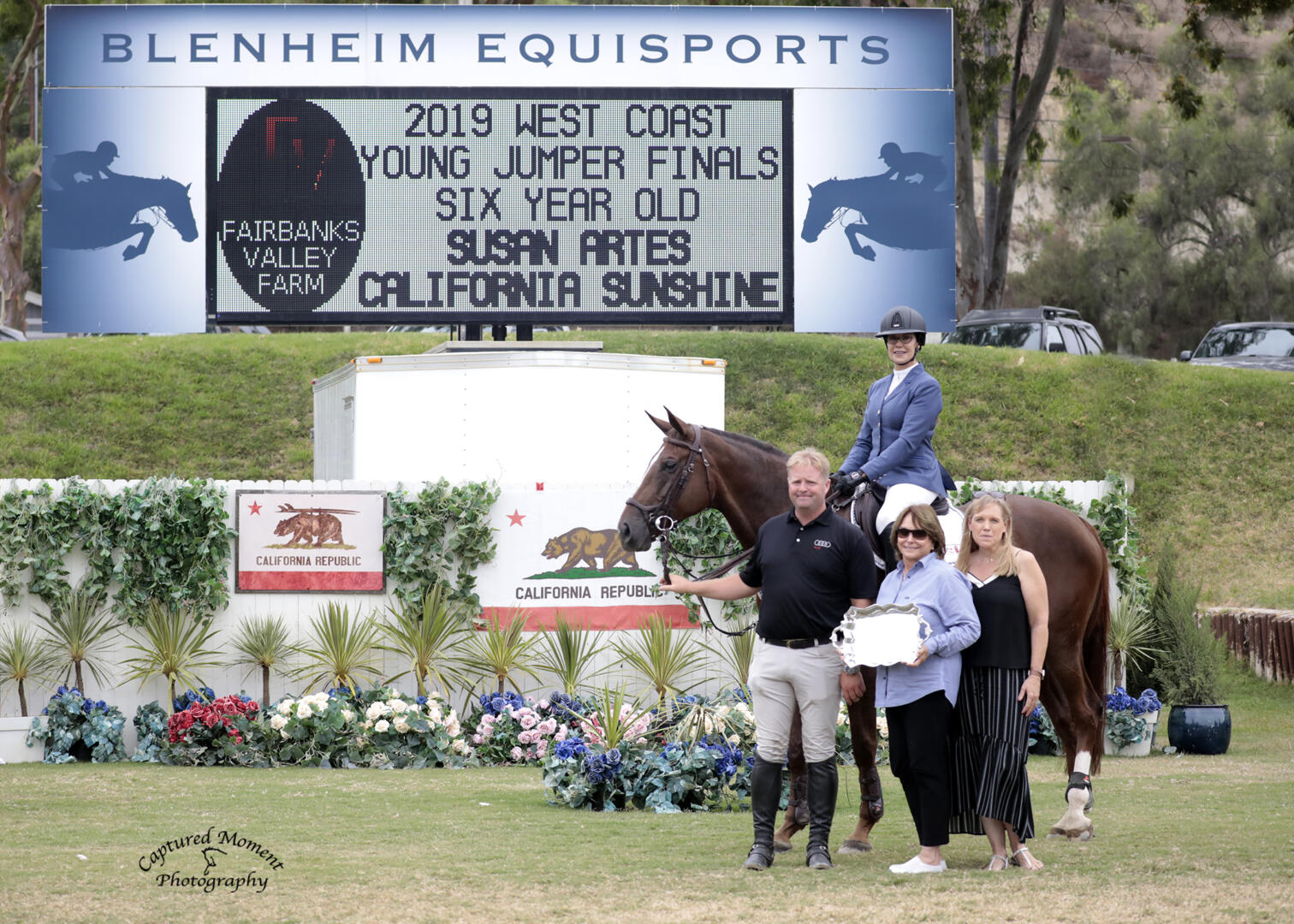 Of the twenty six-year-old horses who competed in this six-year-old division, three riders went double clear in the first two days of competition. After Sunday’s final round, only one pair finished triple clear over the three days. Susan Artes and California Sunshine, owned by Alix Fargo, were completely fault free for the win and the title of the 2019 Six-Year-Old Young Jumper Series Final Champion.

Artes and the mare have developed a very close bond, “She is the love of my life. She really is the best horse I’ve ever had, and I’ve been excited about her since day one. She was supposed to be for my partner Max ]and then I kind of stole her, which he has never really forgiven me for.”

When asked about this week’s courses, Artes noted that her partner took everything in stride, “I thought the courses were nice. It’s hard for me to say that anything is difficult with her because she does everything easily and naturally. I know that over the three days it’s supposed to be more difficult, and the last day was definitely the most challenging.”

There is no doubt that California Sunshine has a bright future ahead of her, “For next year I’ll start in the seven-year-old classes and hopefully by summer she can move beyond that to the Markel Insurance 1.45m Jumper Classics.”

One single time fault in Round Two kept Isabel Roth and Quentin VA, last year’s winner of the five-year-old finals, from forcing a jump-off, and the pair finished in a very respectable second place. Rounding out the podium was Jason McArdle and Nikolina, owned by Fairbanks Valley Farm LLC, who had just one rail in the first round to finish with an overall score of 4 faults. 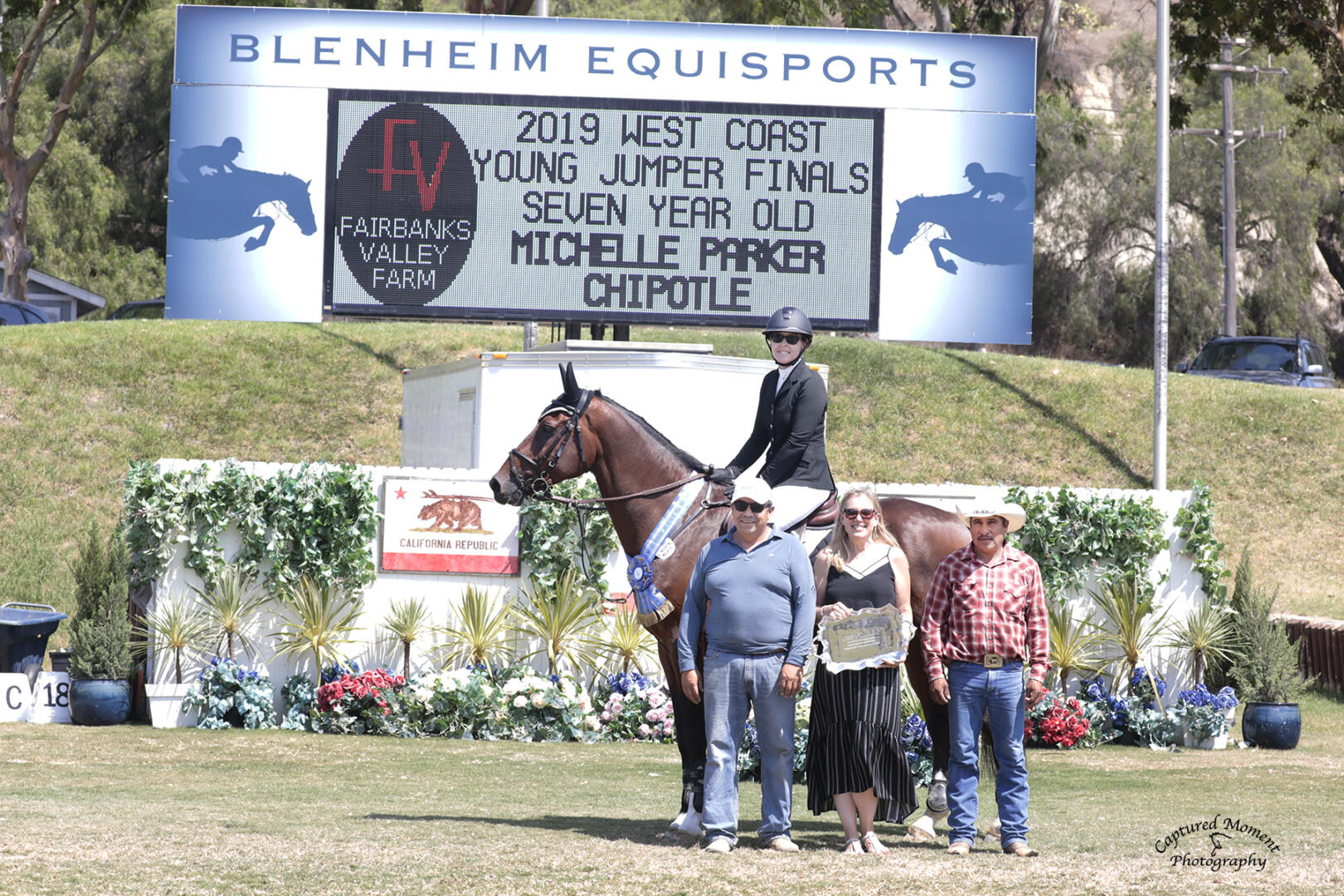 In the seven-year-old division, Michelle Parker and her own Holsteiner gelding, Chipotle, were the best of the six horse and rider combinations. Coming into the third round with a score of four faults, with one more rail on the third day, the pair finished with a total of 8 faults to take the top spot.

Parker is no stranger to developing young jumpers, and to taking the title. This pair did compete throughout the season in the qualifiers at Blenheim EquiSports, and are off to a great start. “I have been riding Chipotle since he was four. We purchased him a few years ago from Joan Irvine Smith, The Oaks, who bred him.”

In regard to the format of the Young Jumper Finals, Parker felt they suited him well, “Chipotle is very energetic and loves to compete. Showing over three days was great for him.”

WATCH! Final round rides and post-win interviews with all three champions

Notably following the #PathwayToSuccess, these young athletes can look up to their fellow winners. The 2018 champions in the seven-year-old division, Jiminy Cricket and Keri Potter, have had a stellar season in the show ring, claiming several wins and top placings in the 1.45m division.

Congratulations to all the competitors, wishing you the best of luck as you continue to grow and show! 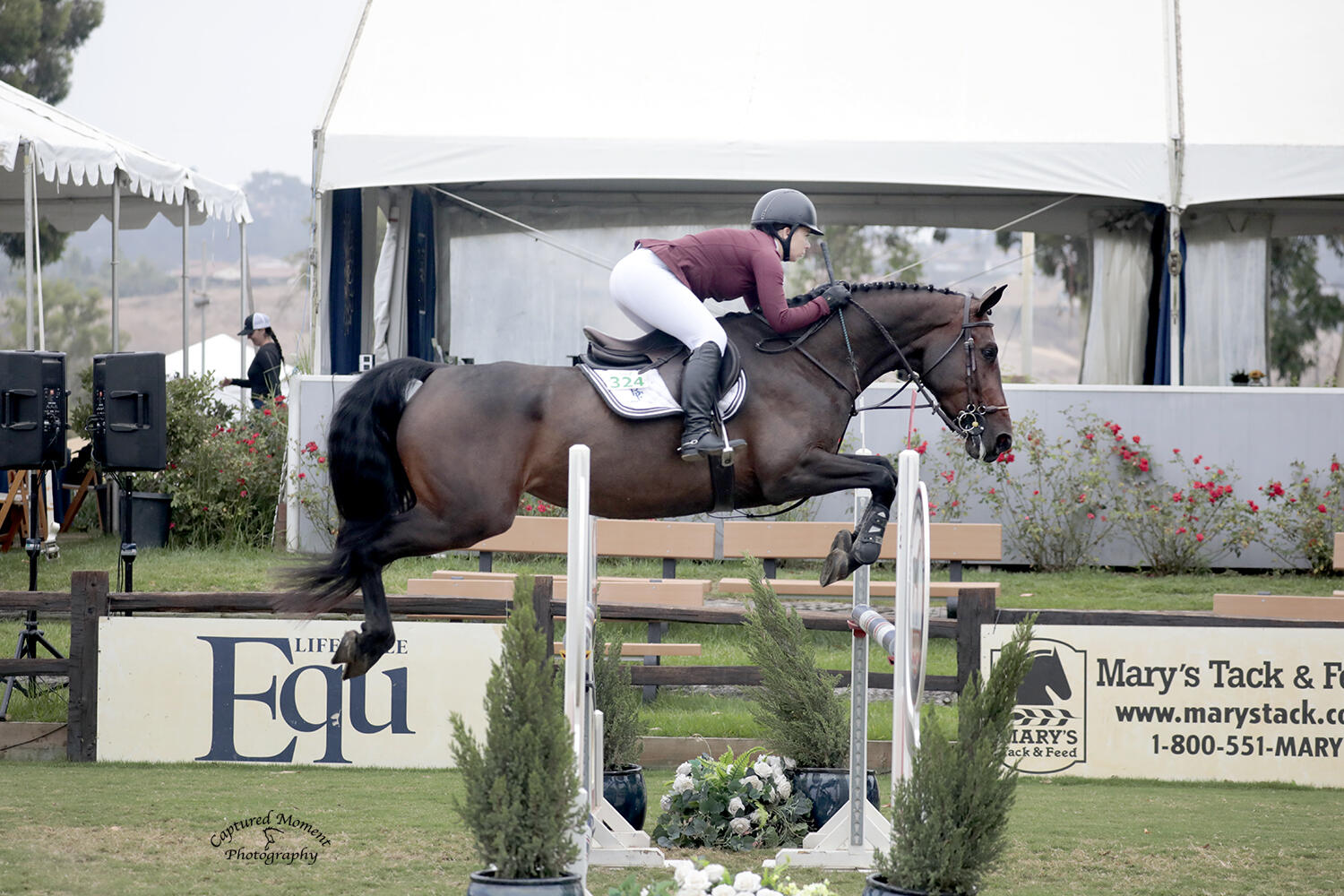 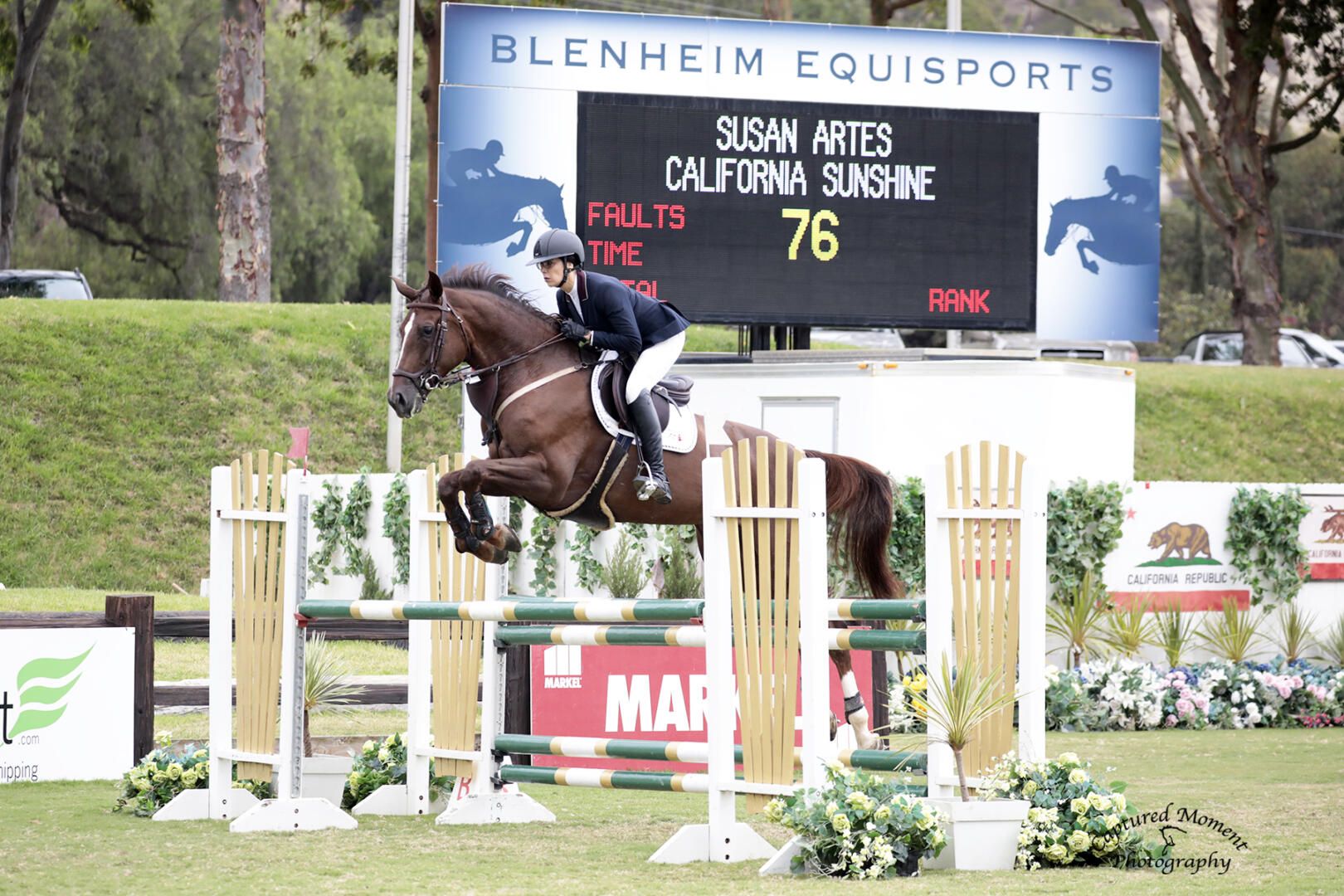 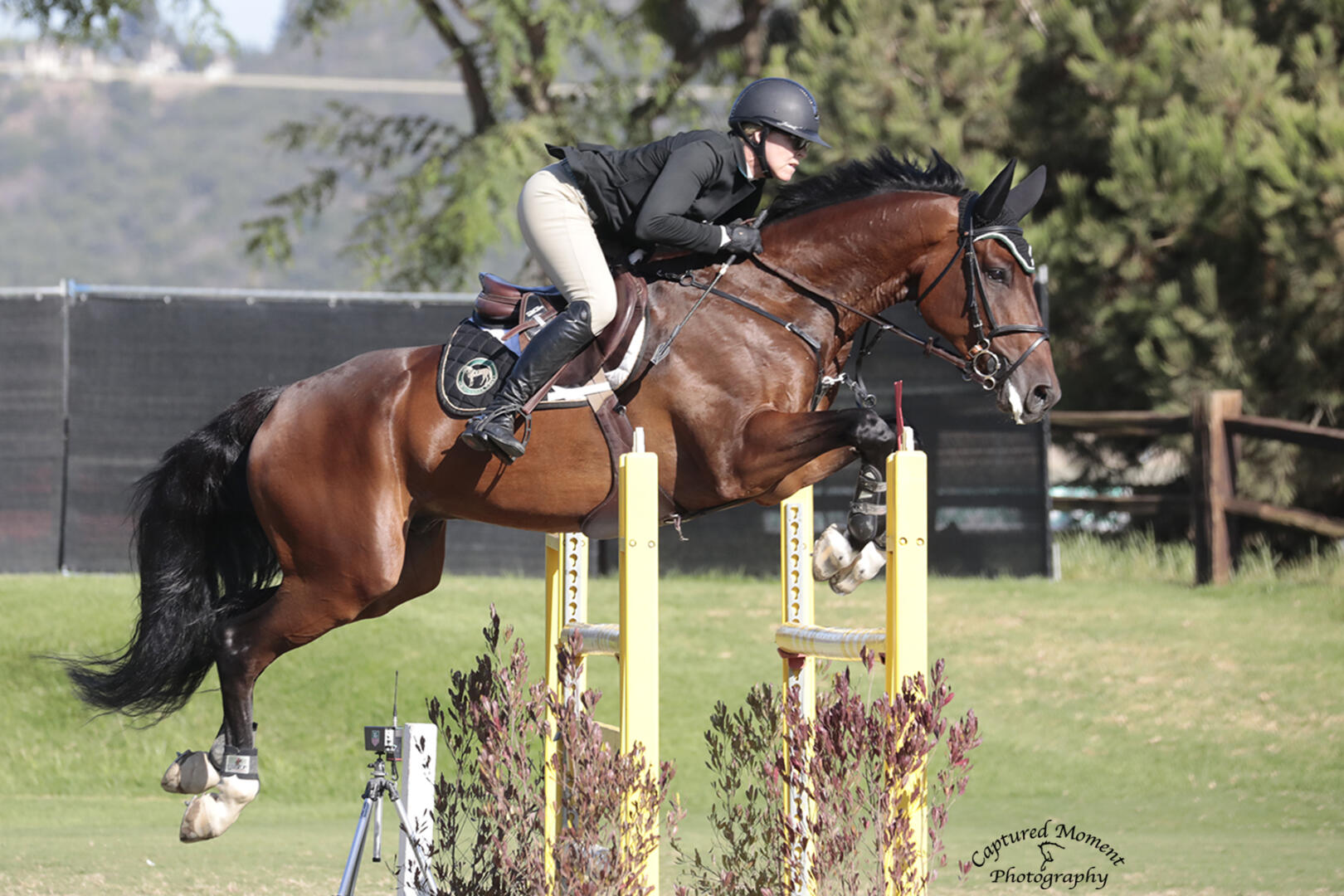 Thank You To Our Generous Sponsors & Partners 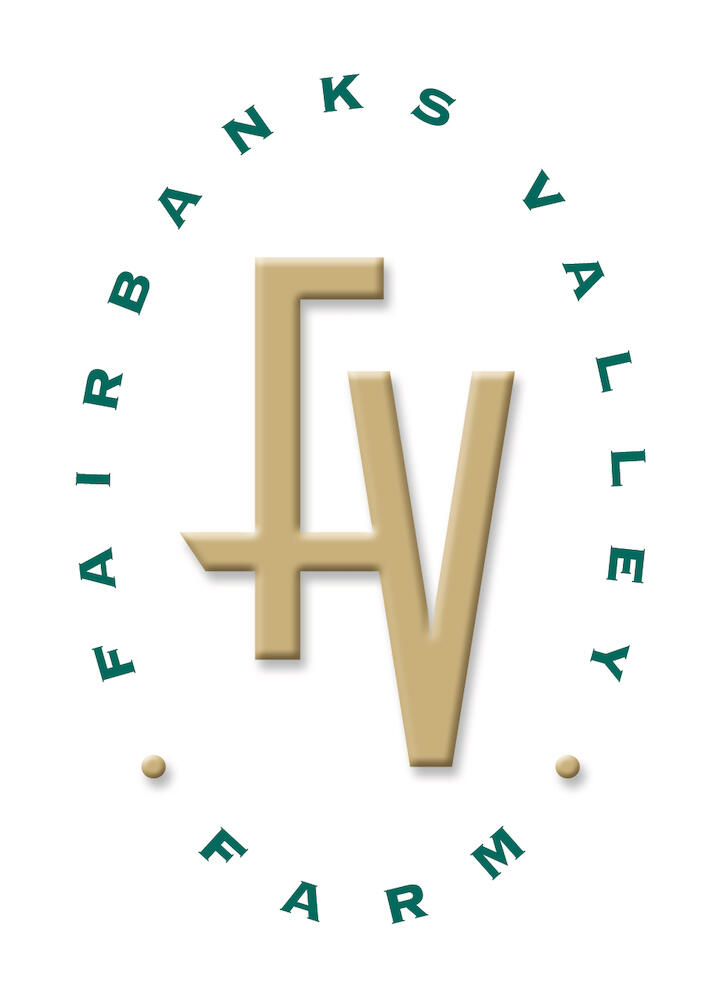 FAIRBANKS VALLEY FARM, LLC
For sponsors Bob and Pam Buie of Fairbanks Valley Farm, LLC, supporting a series and championship for Young Jumpers aligns well with their own program. Several of their young horses, all trained and shown by Jason McArdle, have advanced through the young horse classes and compete in the Championships annually.