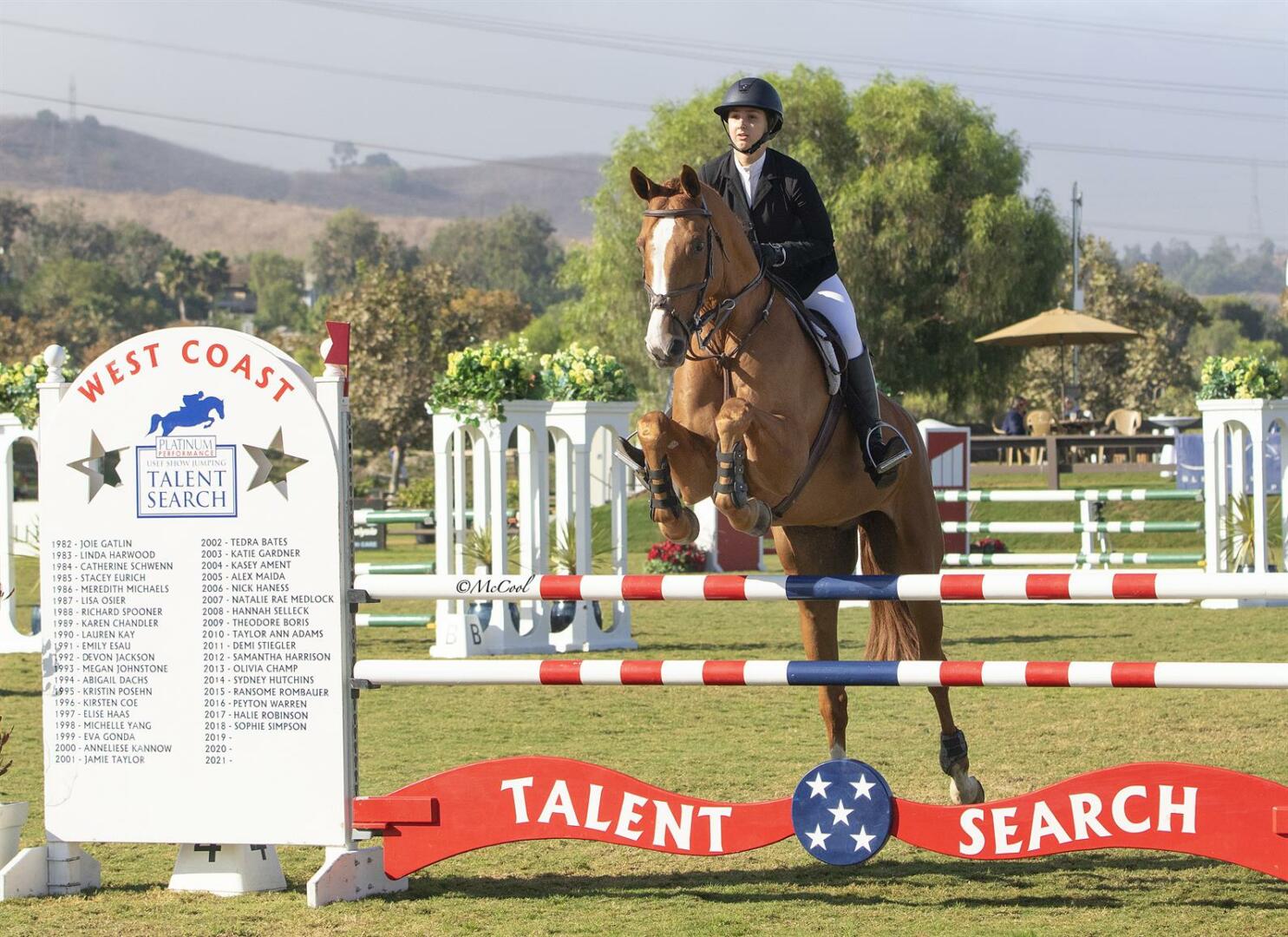 by US Equestrian Communications Department/EQSOL

September 22, 2019 – San Juan Capistrano, CA – Emma Catherine Reichow (Menlo Park, Calif.) takes home the win in the 2019 Platinum Performance/USEF Show Jumping Talent Search Finals – West aboard Campitello 5. In a testament to her talent and ability, Reichow competed and captured the title aboard a catch ride. Clearly suitable for the role, the 12-year-old Hanoverian gelding, owned by Highpoint Farm LLC, earned the Gulliver Perpetual Trophy, donated by Karen Healey, as the event’s best horse per the judges.

Platinum Performance/USEF Show Jumping Talent Search Finals – West judges, Lillie Keenan (New York, N.Y.) and Wendy Peralta (Geneva, Fla.), designed the courses with Anthony D’Ambrosio (Red Hook, N.Y.), who also served as Technical Delegate. In the Rider’s Meeting the afternoon before competition commenced both judges expressed that they were looking for the classic American style of a forward seat with connection, ridden effectively yet with compassion. Riders were informed that they would be judged upon entering, while exiting and that time allowed was important.

Friday morning’s flat phase was split into two groups as the riders were tested on their basic dressage movements such as the counter-canter, shoulder-in, and extended and collected gaits with and without stirrups where fourteen-year-old Parker Cliff (Sacramento, Calif.) earned the highest score of 86 points. The gymnastics phase followed that afternoon, including a, trot-in one stride, rollbacks, a line requiring adjustability, a bounce, and a triple combination. Cliff maintained her lead in this phase with a score of 87 points.

Another pre-event note from judges Peralta and Keenan was about these two phases. “Our vision is that the course isn’t going to favor a specific horse – no matter what ‘type’ of horse you have you can succeed. Every exercise we included are exercises we do with our horses at home. We prepare our horses this way. That is true for both the flat and the gymnastics.”

Anthony D’Ambrosio’s track for the jumping phase on Saturday was challenging, with several tests including a serpentine line up the diagonal of the grass field with the open water as the second element. A smooth, forward track within the time allowed was rewarded. The top score of 86 was earned by fourteen-year-old Skylar Wireman (Bonsall, Calif.), who with the multiplier moved up several places. Reichow’s score of 81 moved her from sixth into the final four.

Reichow was joined by Grace McReynolds (Colorado Springs, Colo.), Cliff and Wireman in the fourth and final phase of competition, where each rode their mounts over a shortened course, followed by a trip on each of the other three horses. Only being allowed a two-minute warm-up and two warm-up jumps aboard each horse, the riders were tested on their ability to ride a shortened track on a variety of mounts. They each entered into this final phase with a score of zero. 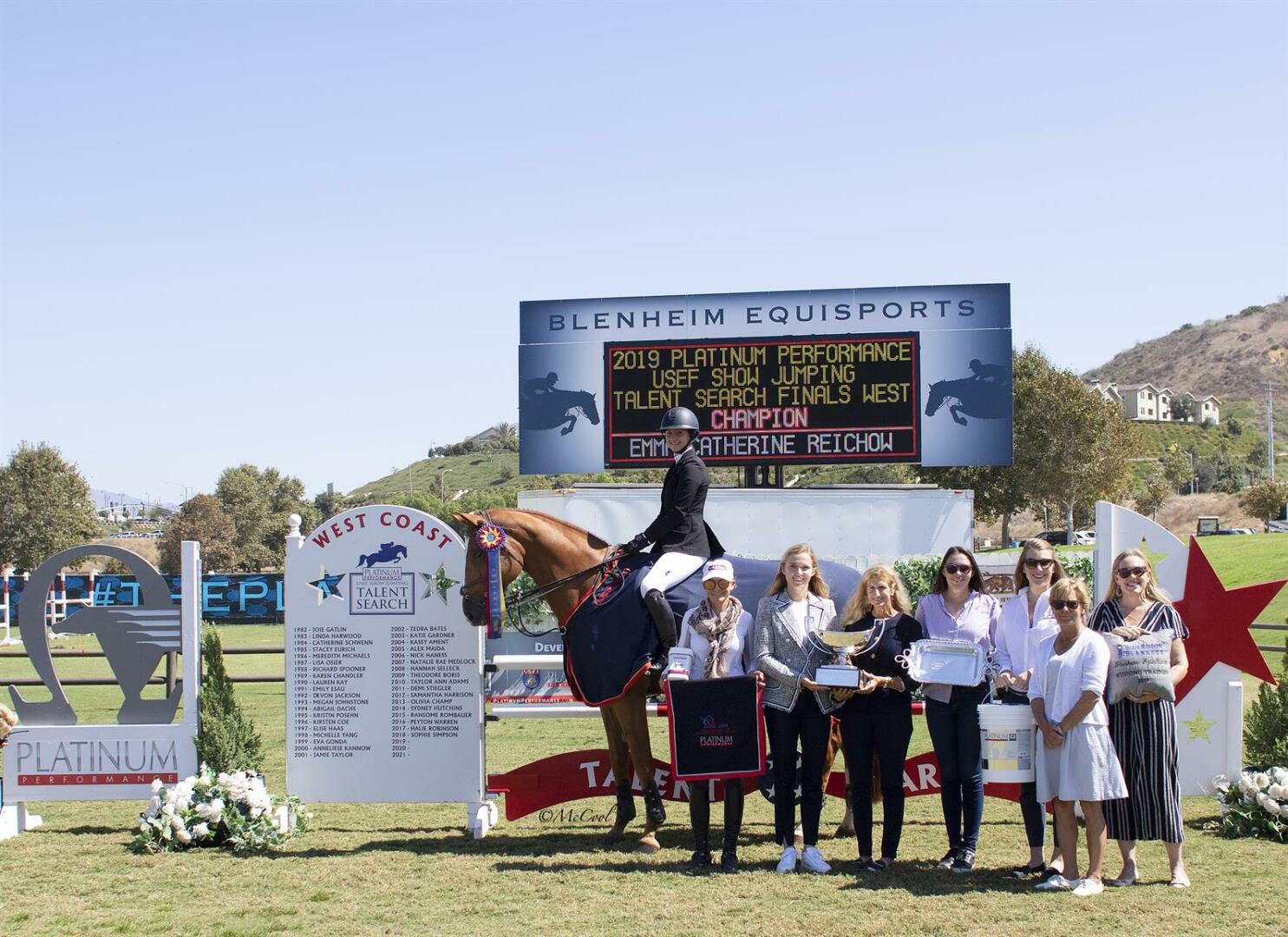 Reichow, whose final score was 327, has championed horses in the hunter, equitation and show jumping disciplines. She also recently made her debut in the FEI Jumping World Cup CSI-W classes in Langley, British Columbia, Canada. Before competing in the final phase, she was awarded her USEF Show Jumping Talent Search Silver Medal for ten wins and for her prestigious Finals title, Reichow received the Denali Memorial Perpetual Trophy, donated by Mrs. Maya Z Hamburger. Her trainers, Harley and Olivia Brown, were presented with the Leading Trainer Award, donated by the late Mr. Hugh J.B. Cassidy, III.

When asked about the victory, Reichow noted, “I have competed in this final three times, and it’s always been a huge goal of mine to win.”

Earning a score of 321, Reserve Champion went to eighteen-year-old Grace McReynolds with Katharina Gebauer’s Springfield Hill. Riding under the guidance of Harriet Bunker, McReynolds traveled from Colorado to achieve her goals of having solid rounds. “I would like to thank Blenheim EquiSports for hosting this final at this beautiful facility. Showing here was such a wonderful opportunity.”

Rounding out the podium in third-place with a score of 307 was Cliff, who was competing in these finals for the first time with her own Fanadwest Rebel and also competed at the North American Young Rider Championships presented by Gotham North in August. When asked about getting to ride the other competitors’ horses, she was thrilled for the opportunity, “Getting to compete against this level of competitors was such an honor, and getting to ride Emma’s horse was a dream come true.”

Taking home the fourth-place ribbon with a score of 305 was Skylar Wireman, who rode Haven Farms Hot Pants in the final. This pair also won the PCHA Horsemanship 14 & Under Finals just two weeks ago.

The USEF Talent Search Program encourages young and junior riders to develop the skills needed to become an effective jumper rider, preparing them to become the next generation of top international riders representing the United States. With a span of ages represented in the final four in this competition, DiAnn Langer, U.S. Jumping Youth Chef D’Equipe, was elated. She commented, “We’ve always looked at the Talent Search and the winners of the Talent Search as our up-and-coming High Performance riders and they have never disappointed.”