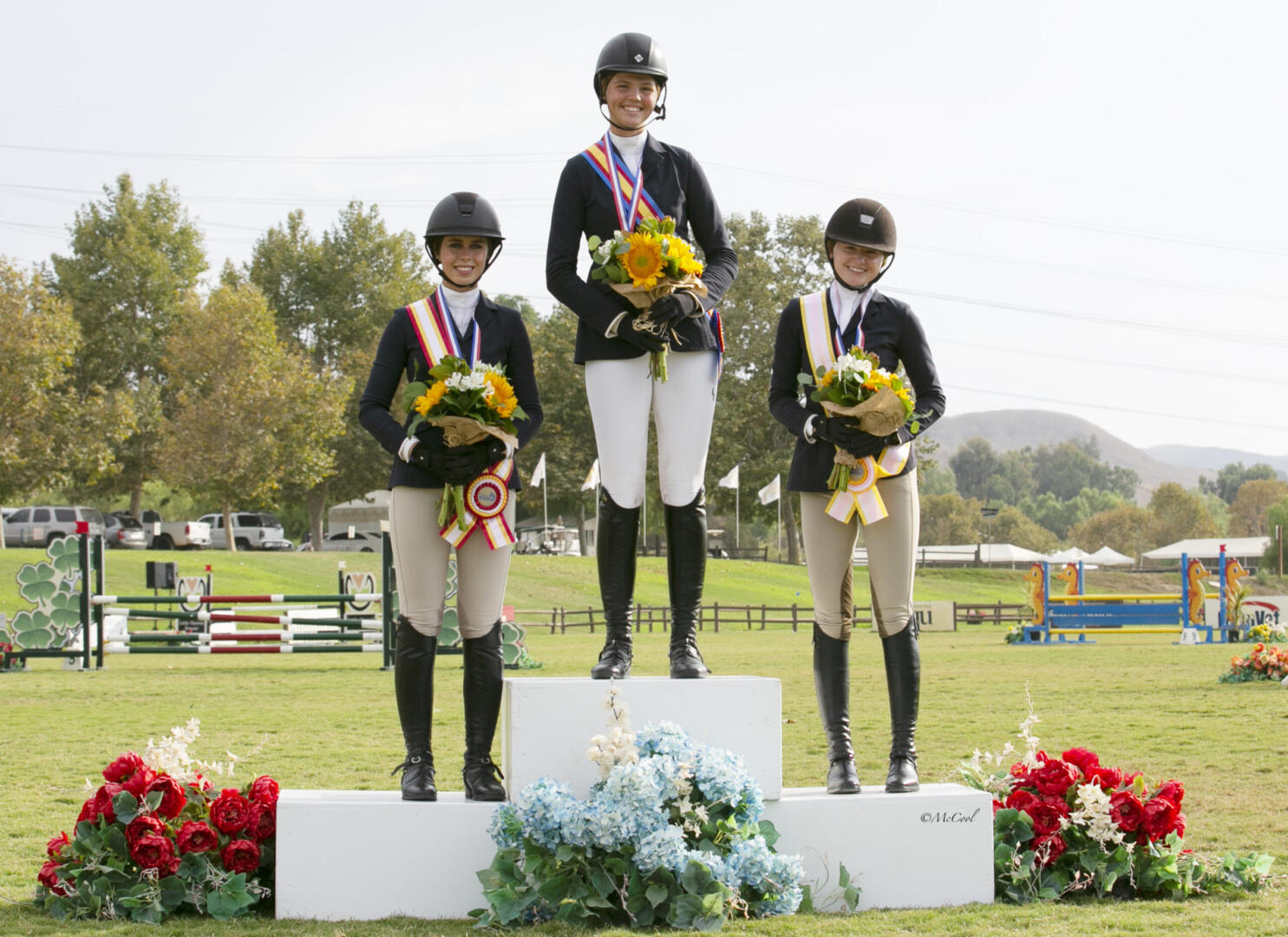 In the CPHA Foundation Equitation Championship Final, 22 & Over, the win went to Stacey Bacheller. In the 14 & Under class, Paige Walkenbach claimed the winning honor, and in the 21 & Under class, it was Madison Nadolenco who topped the podium. 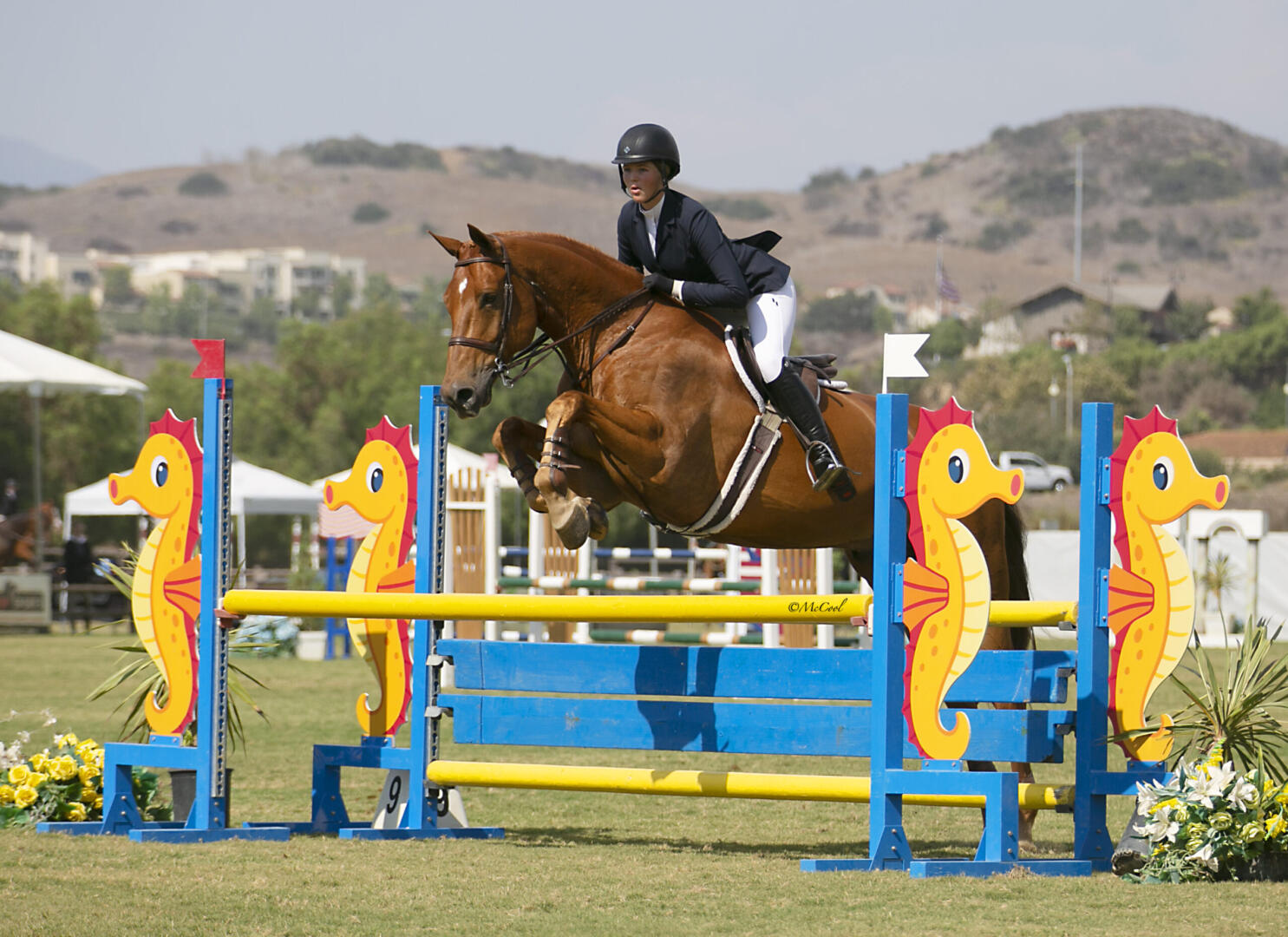 On the way to her 21 & Under win, Madison Nadolenco was one of 74 entries who contested Saturday’s opening round course, set in the Oaks International Grand Prix Field by renowned course designer Leopoldo Palacios.

While Nadolenco considered the first round to be the most challenging test of the weekend, she executed it with ease aboard Couer de Lion, earning the day’s high score of 95 from judges Scott Hofstetter and Lynne Forgione. 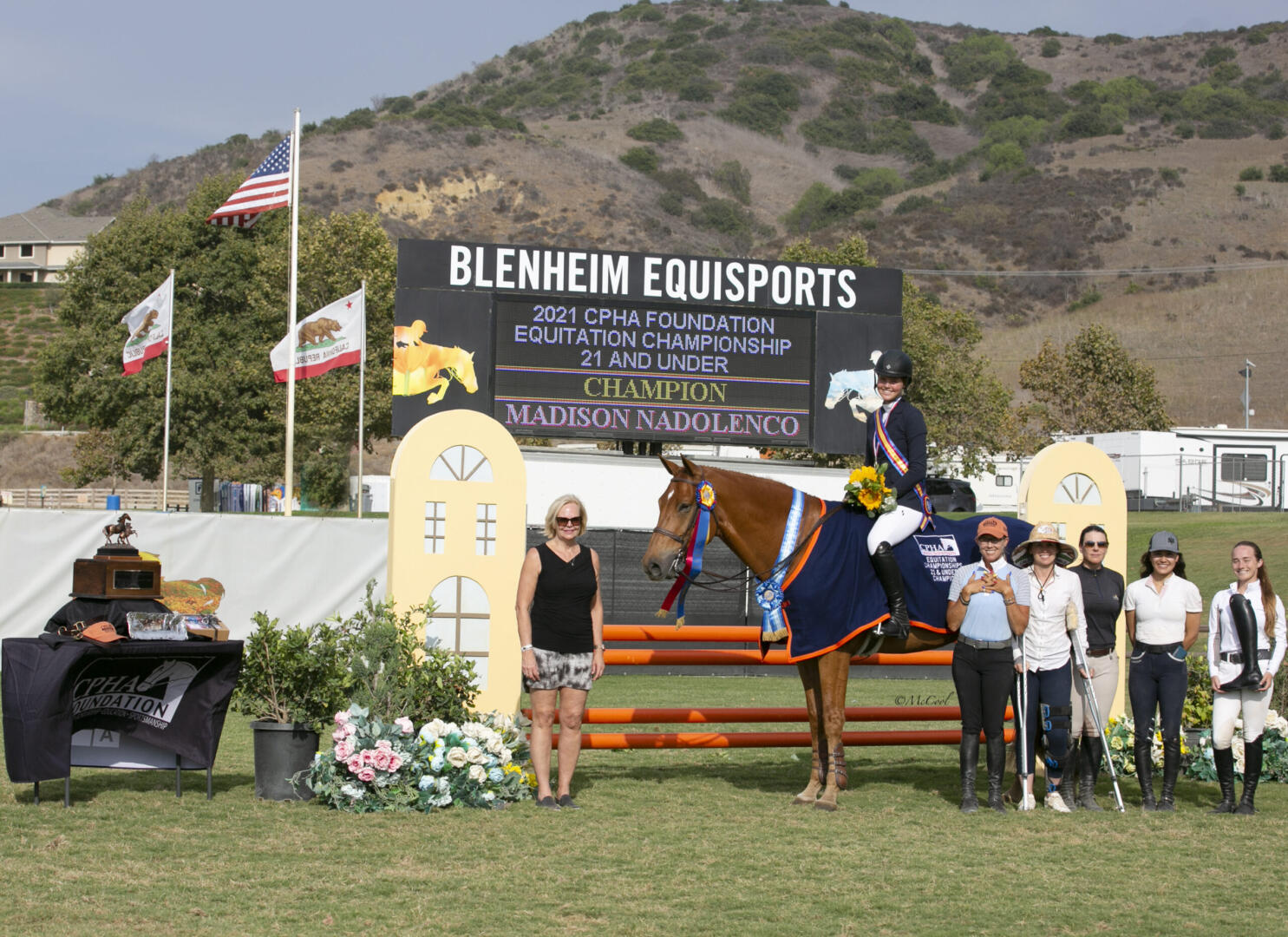 “For me, the counter canter in round one was the most difficult test, because they put it right by the gate and on a tight rollback,” said Nadolenco, who trains with Tasha Visokay. “You really had to be focused throughout the entire course to make sure that your horse was set up for that because I know a lot of horses just wanted to leave by that point.”

With a solid round under her belt on Saturday, Nadolenco only furthered her lead through the second round and through further testing of the top four.

“[Going into the work-off in the lead], I kind of have the mindset of the worst-case scenario is that I make a mistake, and I’m not first anymore. My life still goes on,” said Nadolenco, 15, in regard to keeping her cool under the pressure of being in the number one spot. 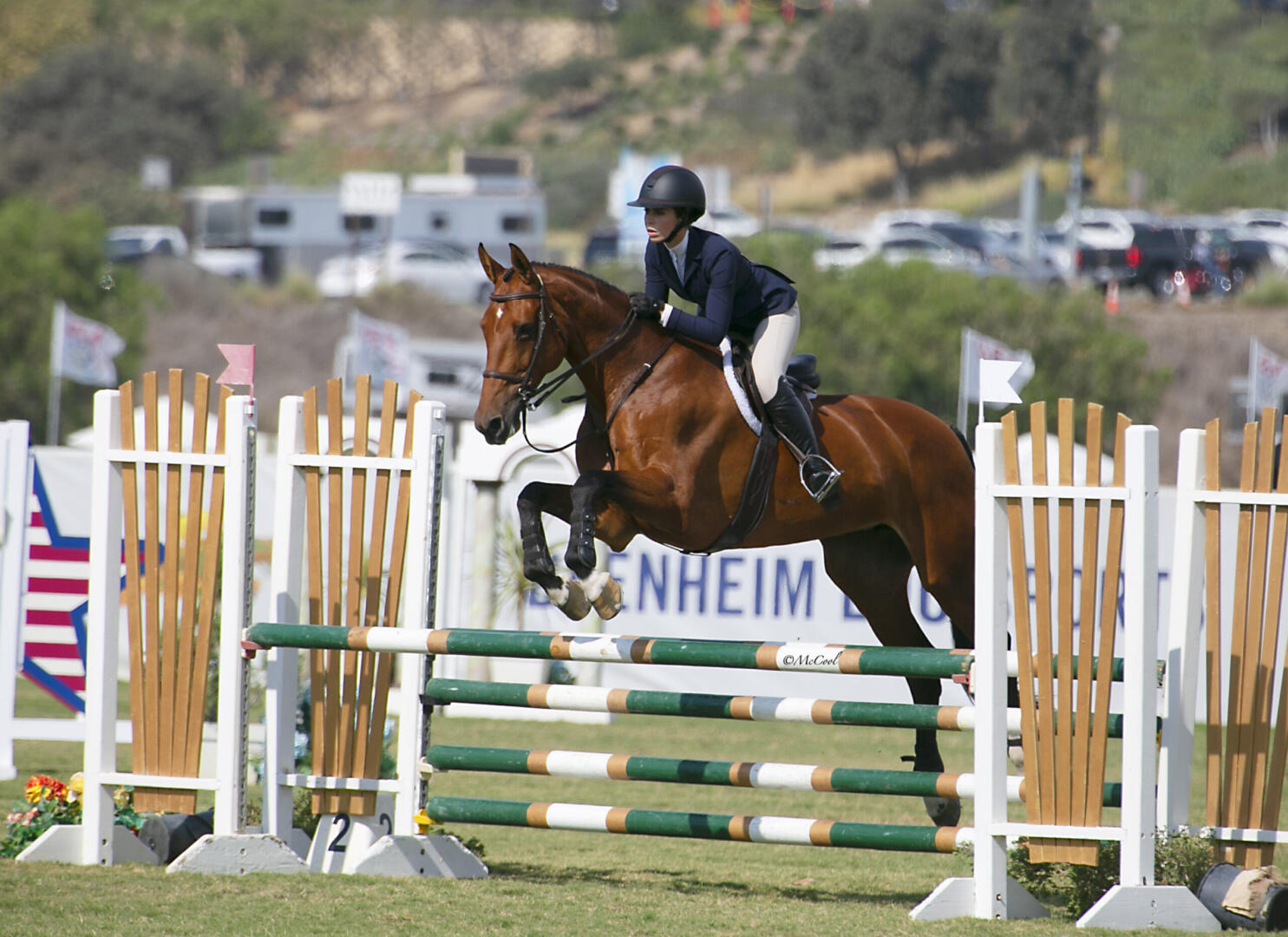 Reserve Champion of the 21 & Under section Avery Glynn

Fortunately for Nadolenco, she did not need to worry about making a significant mistake, as she delivered a well-executed test to earn a score of 81 and further cement her victory.

“Couer de Lion’s the best partner in the entire world. He amazes me every time we come out,” said Nadolenco.

As the winner of the class, Nadolenco’s name will be added to the Barbara Worth Oakford Perpetual Trophy, sponsored by Hester Equestrian.

Second place went Avery Glynn, the 2019 winner of the CPHA Foundation 14 & Under Equitation Championship, and third place was awarded to Sophie Bluhm. 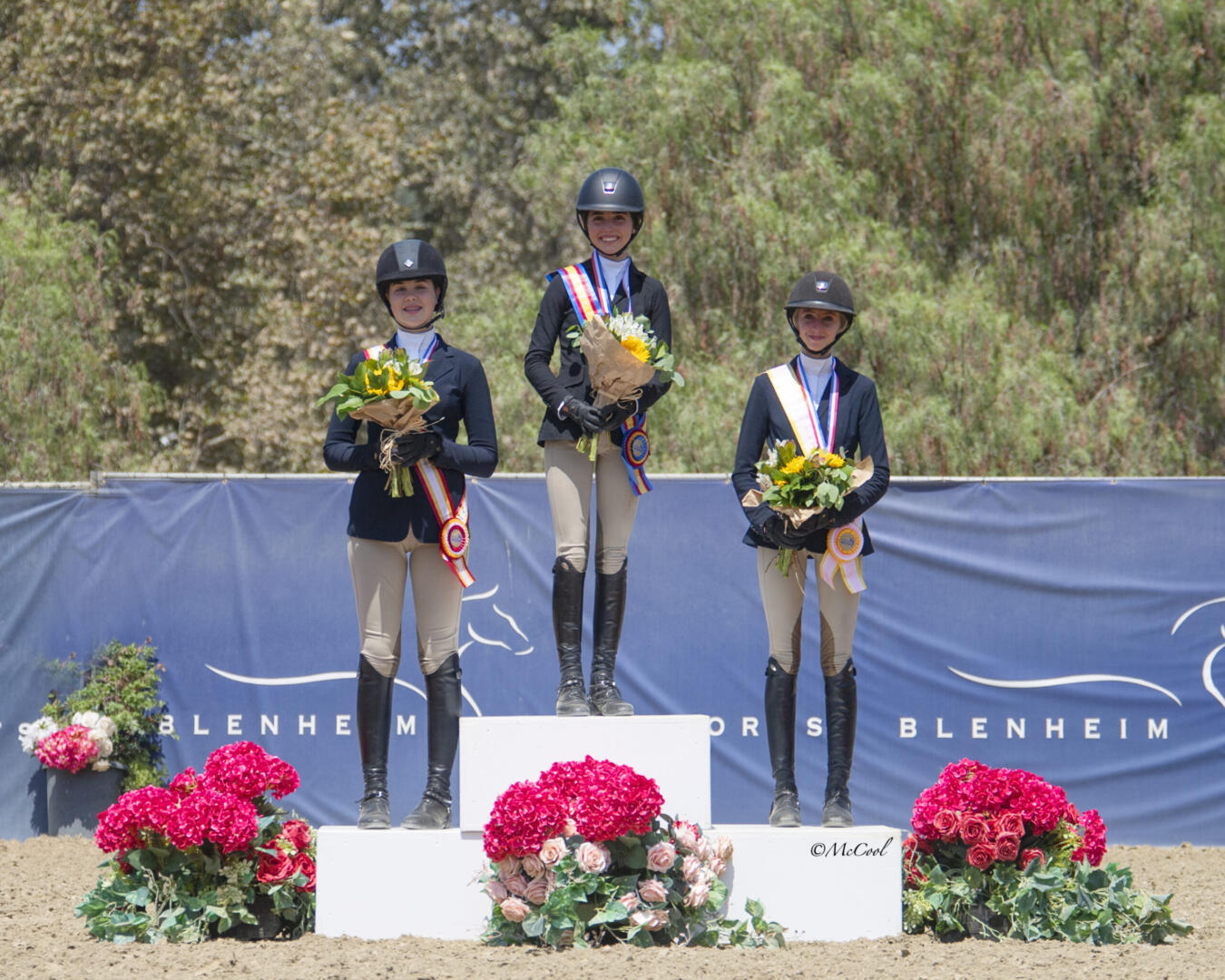 In the CPHA Foundation Equitation Championship Final, 14 & Under, none of the 30 entries could catch 14-year-old Paige Walkenbach.

Aboard Constantinos, Walkenbach led from beginning to end of the three-phase class, with scores of 88 in the first round, 87 in the second round and an 82 in the work-off. 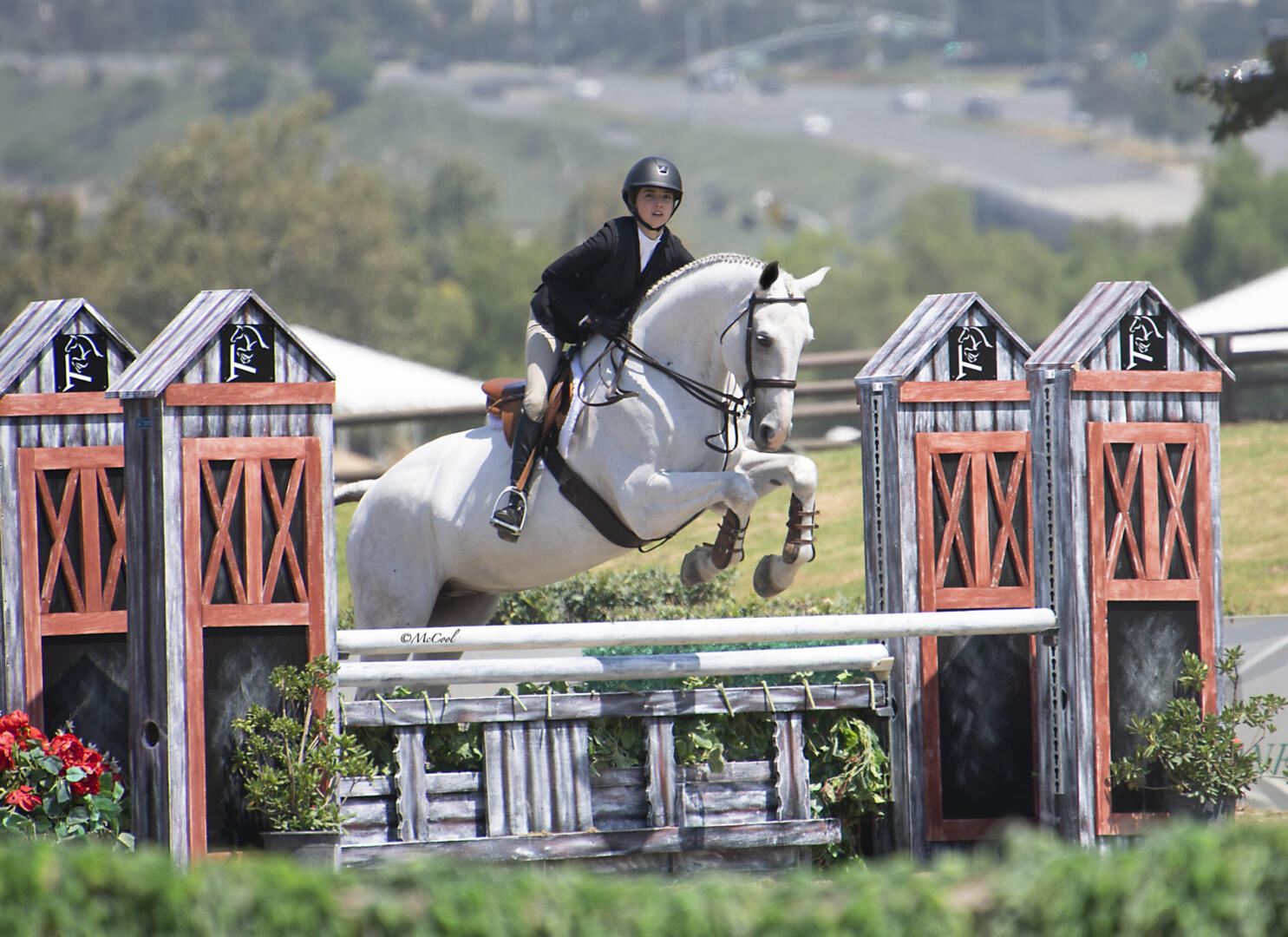 Second place with scores of 78 and 81 and an 88 in the final test went to Vivienne Wood riding Alant. Rounding out the top three was Carmen Gonzalez aboard BeforeAnythingElse.

“It was exciting and good because I knew that if I just had a solid round in the work-off I would be on top still!” said Walkenbach, who trains with James Hagman of Elvenstar. “I think the tests were challenging. I personally have a hard time hand galloping, but I’ve been getting better and practicing. The courses were built very well to show off the tests that they chose.”

For the win, Walkenbach was presented with the Hap Hansen Perpetual Trophy, sponsored by the Van Sickle Family. 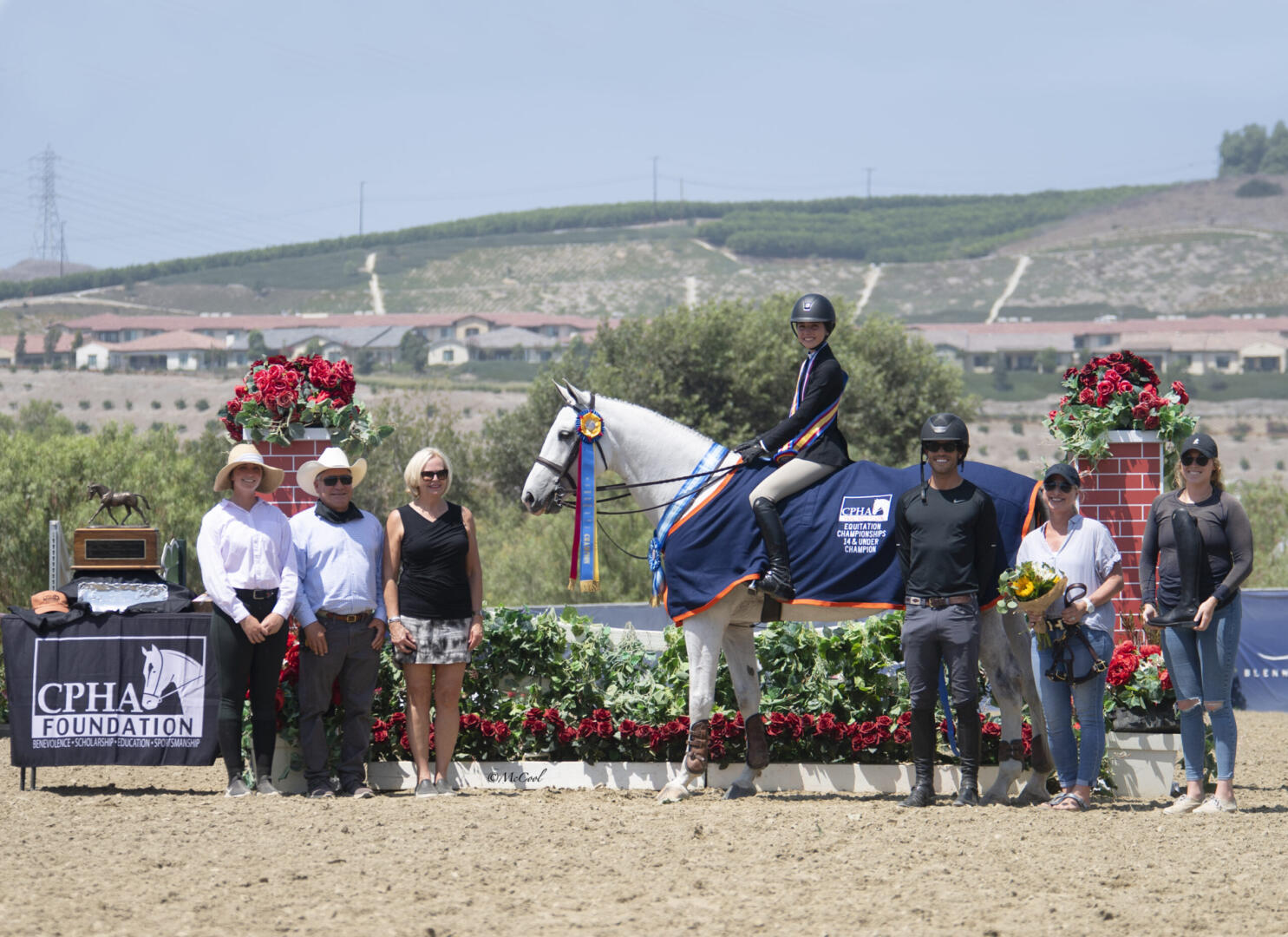 “I thought there was a little inside turn in the work-off, and no one else did it,” said Bacheller, who earned the win aboard Alalux. “I thought, ‘I’m going to do it,’ and [Alalux] was really good!” 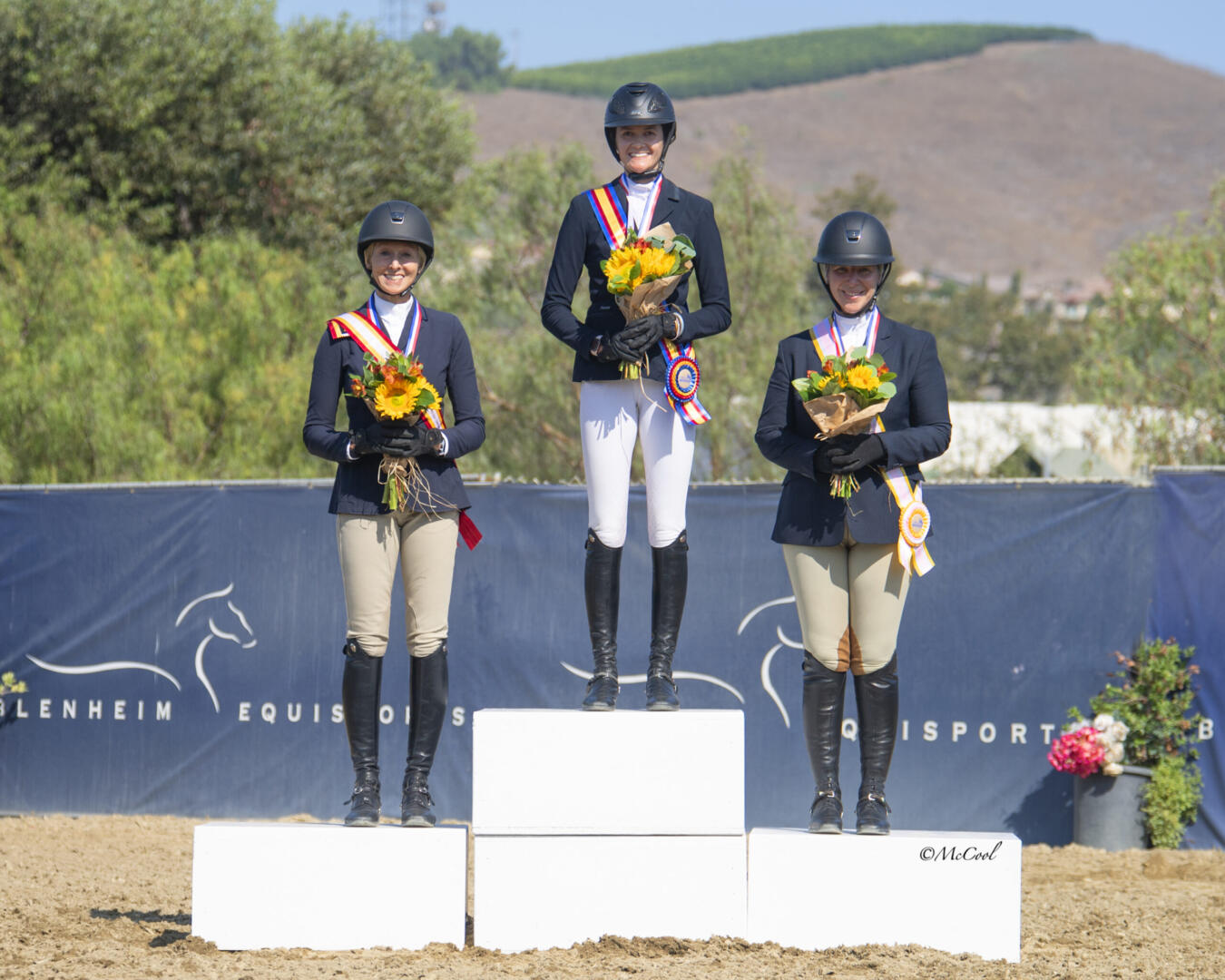 That slick inside turn helped Bacheller earn a work-off score of 92 which, when coupled with her scores of 82.5 and 83.25, secured her the win.

Second place with scores of 82, 81.5 and 87 went to Catherine Westling riding Rigoletto. The third-place honor was presented to Caroline Sutton aboard Cupcake.

“I knew we were all really close at the top,” continued Bacheller. “We were only like 0.75 apart, so I just knew I had to be smooth in the test. Alalux was really good!” 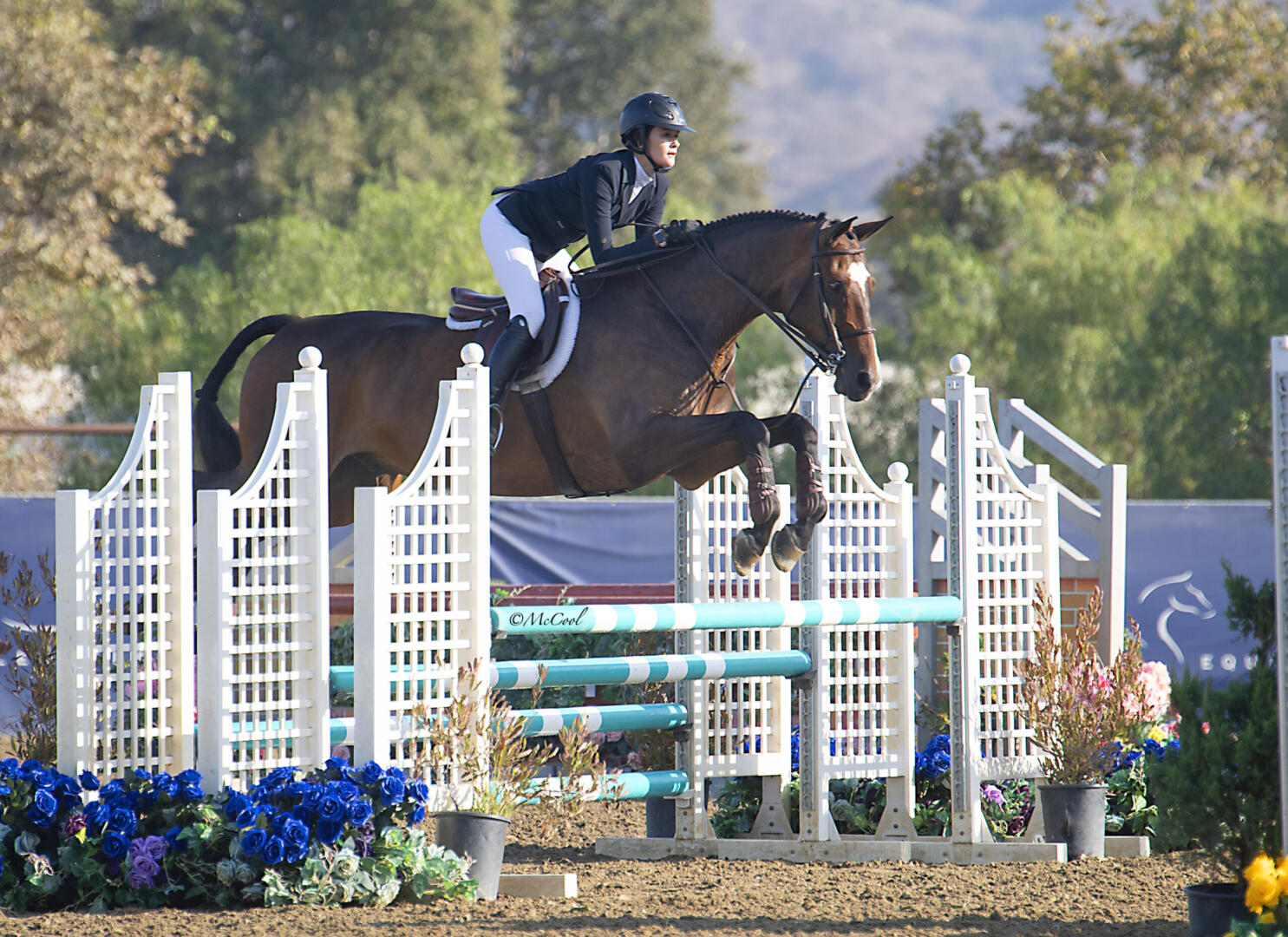 Bacheller began leasing the seven-year-old Holsteiner gelding last year, and following a few months off for Alalux, Bacheller is happy to be back in his saddle again this year.

“He’s the best seven-year-old I’ve ever ridden,” said Bacheller, who trains with Jeni Brown. “You would never tell that he’s seven. When I finished doing the eq as a junior, I basically stopped doing the equitation and only did the jumpers. When I saw these medal finals, I thought, ‘Oh, I miss doing it!’ So, it’s really nice to have a horse that’s really fun and to do these classes is really nice. It’s competitive, but I think the amateur classes are more relaxed. It’s more fun as an amateur than as a junior I would say. It’s less stress!” 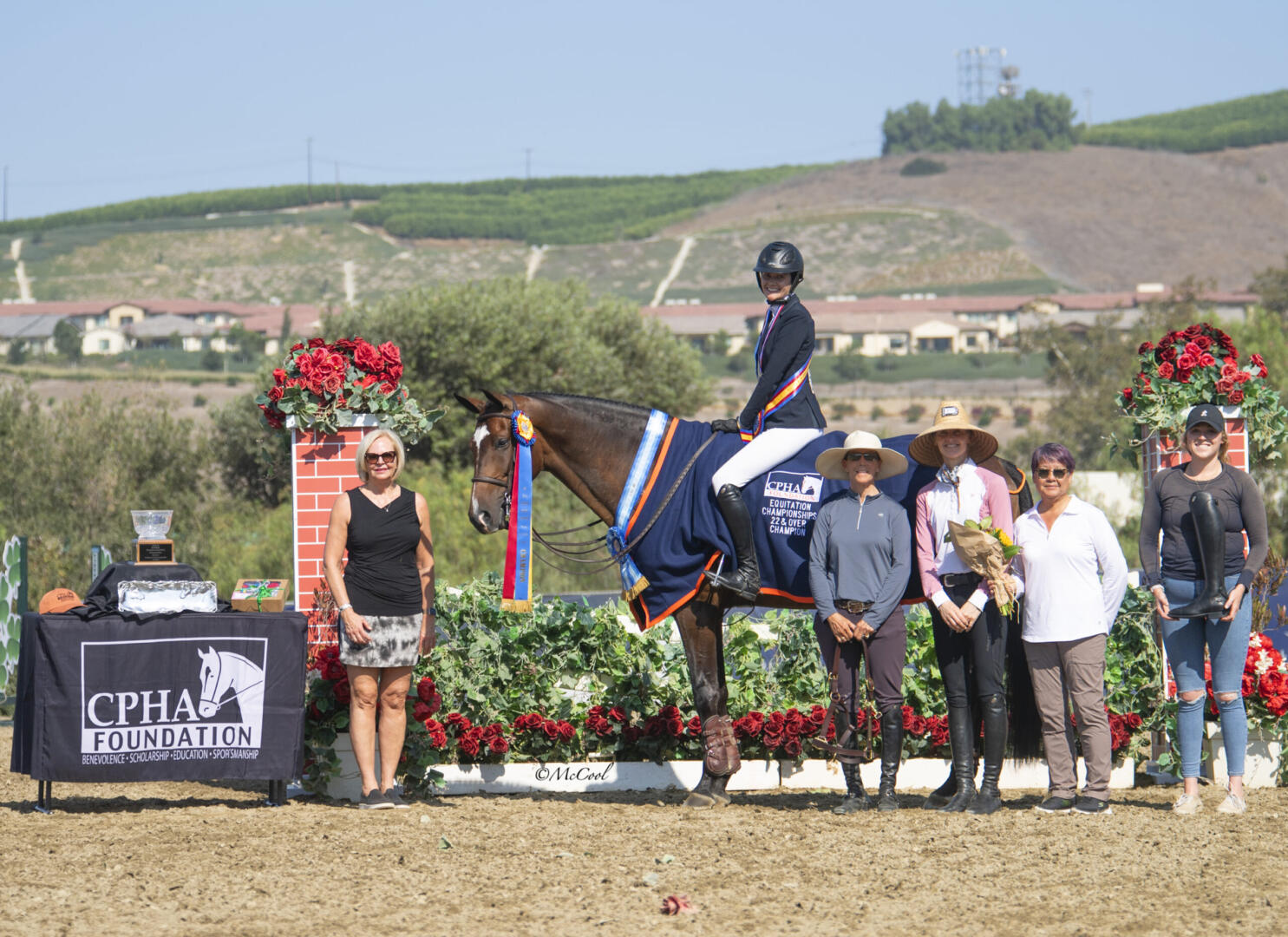 For the win, Bacheller was awarded the Victor Hugo Vidal Perpetual Trophy, sponsored by Betsy Woods.

In addition to the ribbons, sashes, and perpetual trophies awarded, the champions were presented with a cooler for their mounts from DaMoors Feed & Tack, a pair of DeNiro Salento Boots from Outdoor Outfitters, a halter, and a box of Harlow’s Horse Treats. Second and third place in each division also collected a cooler for their horses. Each of the top ten riders received a medal and flowers for their accoplishments.

To learn more about Blenheim EquiSports, the #PlaceToJump all season long, visit ThePlaceToJump.com. 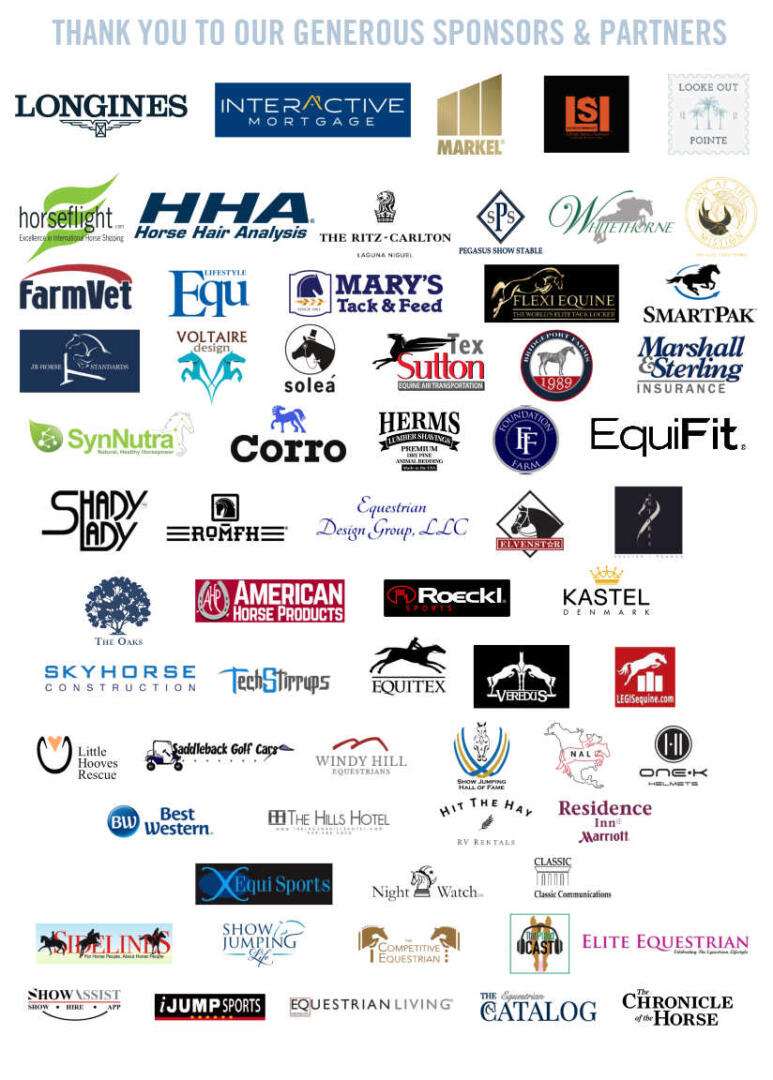