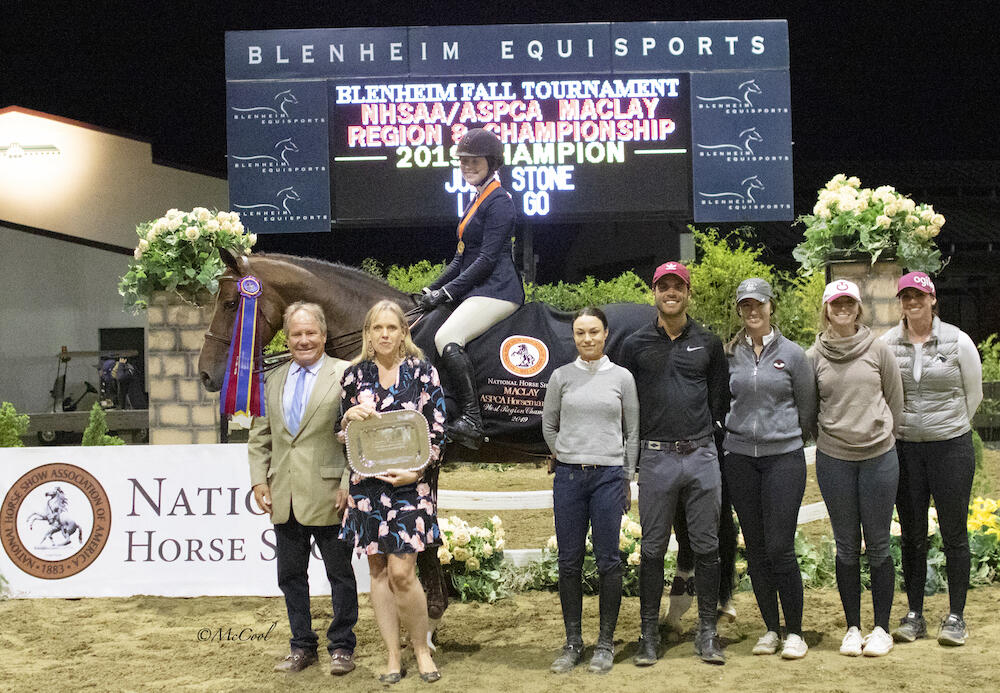 Julia Stone and Let’s Go with her trainer James Hagman, Melissa Brandes of Blenheim EquiSports, and the Elvenstar team 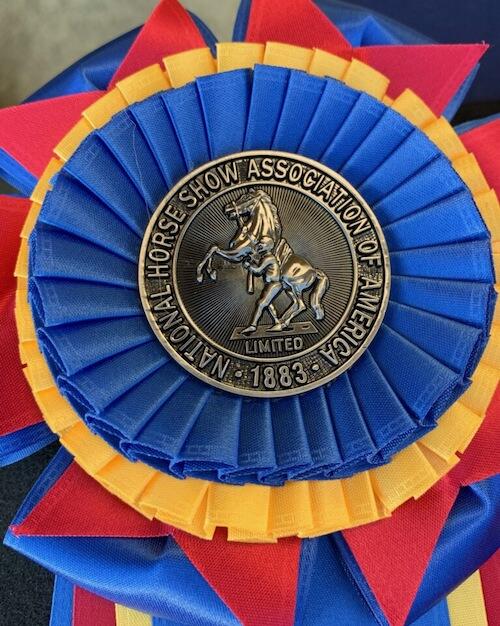 ​September 16, 2019 – San Juan Capistrano, CA – Forty-seven riders competed under the lights in the Indoor Arena at Blenheim Farms on Saturday night, vying for a prize in the Region 8 section of the 2019 NHSAA/ASPCA Maclay Championships. Their trainers, friends, and family filled the stands and VIP as the competitors navigated the course’s equitation challenges. In her second time competing in the Maclay Regionals, Julia Stone rode Let’s Go, owned by James Hagman, to a solid first round, then followed up with a commanding flat phase to take a well-earned victory.

The ASPCA Regionals held throughout the country have two equally weighted phases, jumping and flat, and both count towards 50% of the total score. For their jumping phase, Region 8 competitors rode a track designed by Jasen Shelley of Wellington, FL, that asked several questions and required a well-ridden plan over a combination of hunter and jumper-style fences.

Unfortunately, after the first twelve rides on course, five either had refusals or dismounts at the second jump. The class was paused as Technical Delegate Geoff Teall and Judges Chance Arakelian and Bob Crandall discussed that element in the course. Due to safety concerns, an adjustment was made to the second jump, and any riders who had already competed were given the opportunity to have a re-ride.

In the second phase the top thirty-five riders returned in three separate groups, where the honorable Arakelian and Crandall tested their skills on the flat. Post this phase the judges felt that no further testing was required and the top ten were pinned.

Training with James Hagman of Elvenstar Farm, who is also the owner of Let’s Go, Stone is a freshman at Georgetown University, learning to balance college and riding. On point tonight, the pair will be heading to Lexington for the Maclay Finals in early November. This dynamic duo also won the multi-phase USHJA 3’3″ Jumping Seat Medal Final in 2018 and placed second in the 2019 American Tradition of Excellence Equitation Challenge, presented by Whitethorne. A big year for her Big Eq dreams, Stone is aging out. 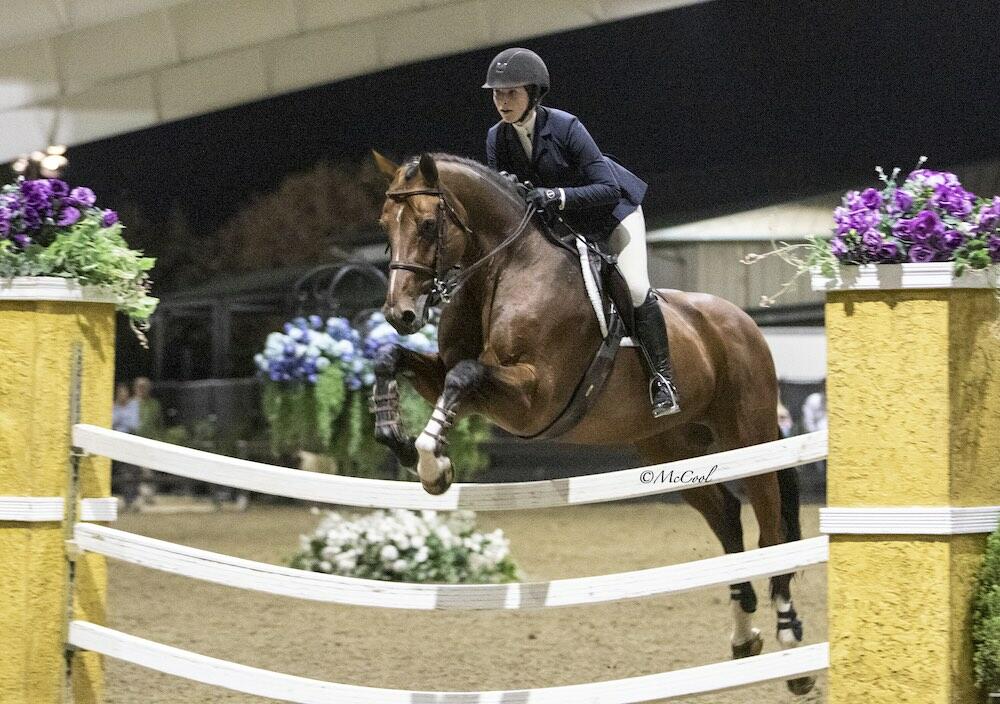 “I haven’t been able to practice as much lately because I’ve been balancing college life as well,” the champion explained. “When I drove into the horse show today I couldn’t help but think about the fact that this is my last time competing at Blenheim EquiSports as a junior.”

Click above for the interview with 2019 winner Julia Stone

As the winning horse Let’s Go also earned the Vigo Best Equitation Horse Award. In its third year, the perpetual trophy is in memory of Robyn and Demi Stiegler’s amazing equitation mount, who had his retirement ceremony on this night two years ago. 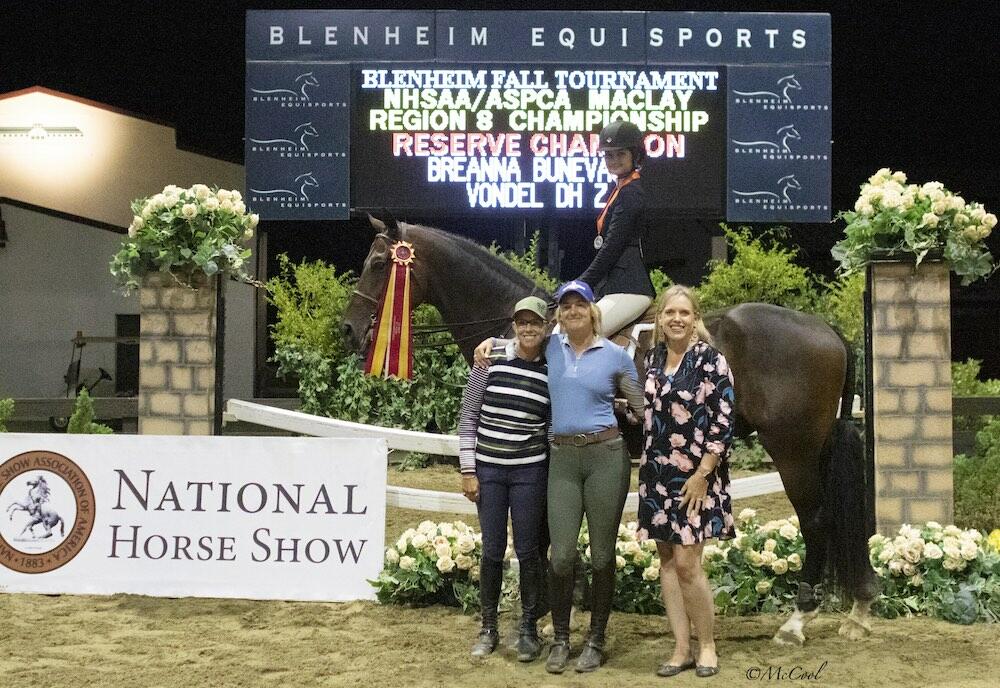 A fellow Elvenstar student, Kaitlyn Lovingfoss, rounded out the podium on Munich. The young rider is also balancing college life at Texas A&M University with competing, and is clearly handling the pressure well. Lovingfoss is another top equitation rider who has led several victory gallops including the 2018 USHJA Hunterdon Cup Equitation Classic West Coast and the 2017 CPHA Foundation WCE Jr/Am Medal Final.

Prior to the start of the competition, The Shelby Drazan Memorial Award was presented to Emily Williams, who rides with Archie Cox of Brookway Stables. This special annual award is given to a rider who shows sportsmanship, integrity, and passion both in and outside of the show arena. Williams not only applied with an essay that highlighted all three of these qualities, but glowing recommendations accompanied it. 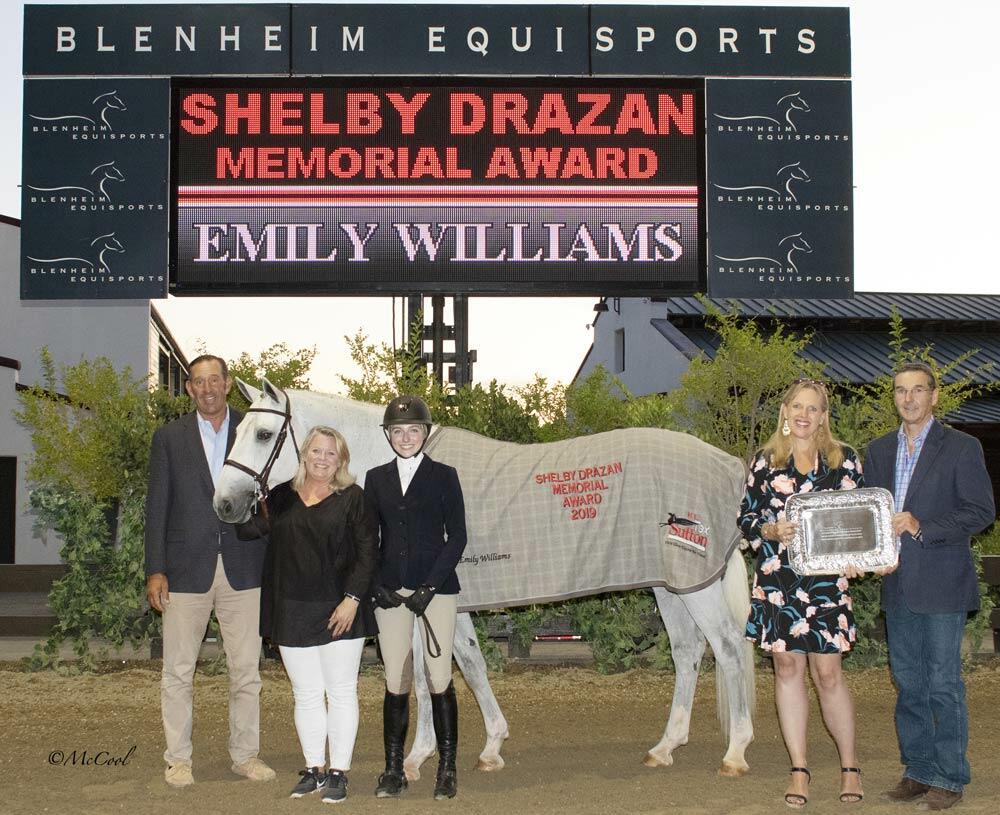 The award, in its fourth year, provides the recipient with an opportunity to travel to the Indoor horse show circuit, with air and ground transportation provided for one horse and equipment. On top of the flight, provided by HE Tex Sutton Forwarding Company, the Drazan family provides $2,000 towards Dover USEF Medal entries at the Pennsylvania National Horse Show in Harrisburg. Ready to take on the challenges of equitation on the East Coast , the young star was champion of the 2018 CPHA Junior Medal Finals.

Click to watch the interview with Emily Williams and Greg Otteson

UPDATED: The top 29 riders from the Region 8 Maclay Championships will be invited to compete at the prestigious NHSAA/ASCPA Maclay Championships, taking place on Sunday, November 3, 2019, at the 136th annual National Horse Show at the Kentucky Horse Park.